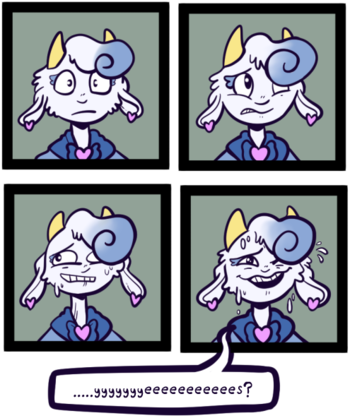 The lovechild of Law of Conservation of Detail and Realistic Diction Is Unrealistic, Hesitation Equals Dishonesty is ubiquitous to the point of being unnoticeable. Whether engaging in Blatant Lies or making sure to Let Them Die Happy, any time a character visibly hesitates when relaying information (rather than, say, making an emotional appeal) to another character, it's even money or better that they're being dishonest, and are trying to barely avoid Saying Too Much.

Performance-based works will often use this trope even when the audience knows that the character is lying to avoid a Seamless Spontaneous Lie. If the character tells a lie without any indication of effort, they'll suddenly look like master manipulators, which might be out of character. The trope can also be used on the assumption that Viewers Are Morons. If the character's delivery doesn't scream "lie," the audience might get confused and think that either the character believes what he just said or that his statement is actually true.

Expect a Tsundere to engage in this. Every time they deny having any feelings for his or her object of affection, they will repeatedly stutter and hesitate. Often said object of affection will not understand the implications of such hesitation.

The trope extends to video games, even to the dialogue of the player characters: Even if Statistically Speaking the PC is an excellent liar, there's a good chance the writers will mark his Blatant Lies with the all too subtle "Why, yes.... I AM the assassin you've ordered".

Sadly, belief in this in Real Life makes things even more difficult for those of us who aren't perfect communicators. Fridge Logic should indicate that the guy with the perfectly rehearsed story is probably lying his ass off (or is extremely well-spoken, but there's a noticeable difference between the two), rather than the guy who occasionally pauses to collect his thoughts. Also, anything from being very anxious/suffering a panic attack (which can be induced in some situations where the truth is demanded — for example, the mere presence of police officers is a massive trigger for some forms of anxiety and panic) to being sleepy, drunk/high, or simply unsure and wanting to tell the truth but not sure of what the "truth" is can lead to hesitation and even confusion. Subtrope of You Can Always Tell a Liar. Compare Seamless Spontaneous Lie.

Compare/contrast with Suspiciously Specific Denial, where Saying Too Much suggests you're being dishonest. Also see Incriminating Indifference.

Chocolatey accidentally eats Pinecone in her sweets craze, then in the stinger she's asked where he is, and she says that she has no idea.

Chocolatey accidentally eats Pinecone in her sweets craze, then in the stinger she's asked where he is, and she says that she has no idea.