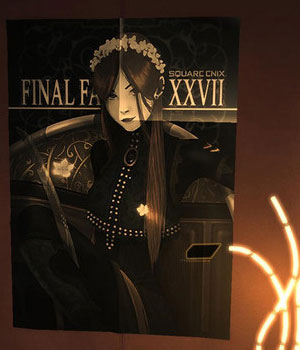 This poster is seen in 2027. That means there's half a decade left and eleven more games to go. Hurry up, Square Enix!
Lister: Oh, the new Friday the 13th movie — "Friday the 13th part one thousand six hundred and forty nine".
Rimmer: Look, Casablanca. They've re-made Casablanca.
Lister: Philistines! I mean, Casablanca? The one starring Myra Dinglebat and Peter Beardsley was definitive.
Holly: I saw that one. Knockout. "Of all the space bars on all the worlds, you had to re-materialize in mine."
— Red Dwarf, "Better Than Life"
Advertisement:

A work set in the future will often take elements of the present day and refer to them as a way to show that it is our future and not a fictional place. One form this can take is for there to be a reference to a contemporary Long Runner, and show that it is still going strong.

The chosen long runner is usually one that is well known for having several Numbered Sequels, which means all you need do is bump the number up by a few dozen.

Usually a throwaway gag, or incidental background detail for the eagle eyed.

But as nothing dates quite as fast as science fiction, the reference might pass a later audience by altogether.

This trope was popularised in The '80s, and the two most common film franchises joked about in the earliest examples were Rocky and Jaws, the former because it had already produced an unusually large number of Numbered Sequels, and the latter because it was often regarded as a Cash-Cow Franchise remaking the same film over and over again, so conceivably they could carry on doing it forever. Nowadays, the most frequent targets seem to be the Marvel Cinematic Universe and Star Wars.

Distinct from Oddly Named Sequel 2: Electric Boogaloo, which is where the work itself has a title which plays with the Numbered Sequels trope. Compare Sequel Snark.

First of all, who thought of that title?

First of all, who thought of that title?