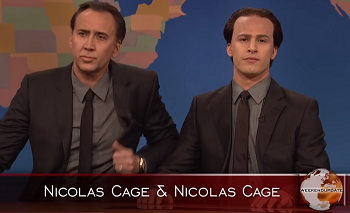 Nicolas Cage is beside himself tonight.
"When is Weird Al gonna do 'Like a Surgeon'?"
— Madonnanote Yankovic would do it on Dare to Be Stupid
Advertisement:

A great honor for anyone working on a parody is when the creator or anyone else involved with the original goes beyond granting the parodist permission (and even enjoying said work) and instead actually helping them out with their parody. This can be as simple as lending sets or as drastic as directly working with the parodist, such as singing in a duet.

Related to Adam Westing, an actor's Self-Parody of either his most famous role, his Old Shame, or his Typecasting. Also related to Approval of God, when a work's author approves the fandom's parodies (although that applies to Fan Works as well), and to Actually Pretty Funny, when a parody's target thinks the parody itself to be just that. See also Meme Acknowledgment and Official Parody.