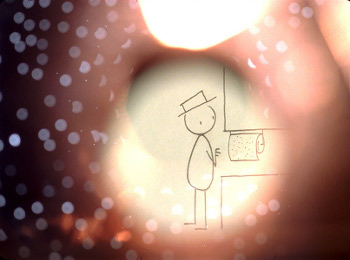 Don Hertzfeldt (born August 1, 1976) is the creator of many short animated films, including the Oscar-nominated "Rejected"

and Everything Will Be OK. He has an odd style, stick figures on paper with very little use of digital processing. You can get his films at his website, Bitter Films,

and read up on some Word of God in this Reddit thread.

His animated shorts include:

There was also a series of Pop-Tarts commercials which were not by him, but made without his permission in his style after he refused offers to make advertisements.

The Meaning Of Life