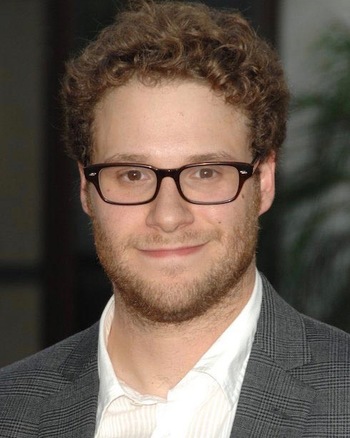 "I'm proud to say that I've never had a normal job. I started doing stand-up when I was in high school, purely as a measure to never get a proper job."
Advertisement:

Seth Aaron Rogen (born April 15, 1982) is a Canadian-American actor, comedian, screenwriter, producer, and entrepreneur. Often working with Judd Apatow and writing partner Evan Goldberg, Rogen has appeared in over 20 films during his career.

A Vancouver native, Rogen started out doing stand-up before getting supporting parts in Apatow's TV series Freaks and Geeks and Undeclared. His first major film role was in Apatow's The 40-Year-Old Virgin (which he also co-produced), which solidified him as a member of the Frat Pack. He then went on to star in Knocked Up, Funny People, and Observe and Report; and co-wrote with Evan Goldberg the movies Superbad, Pineapple Express, and The Green Hornet. In 2011, he married screenwriter Lauren Miller and played a supporting role in Like Father which Miller directed. He has also done voice acting, providing the voices for Mantis in Kung Fu Panda, Paul in Paul and Pumbaa in the The Lion King (2019). You probably don't know he was in Donnie Darko, either. His directorial debut with Goldberg, This Is the End came out in 2013. He also co-directed The Interview with Goldberg, which caused a substantial amount of controversy in North Korea. In 2016, he co-produced Sausage Party with Golberg. He also co-produced and starred in Long Shot. Since 2016, he has been an executive producer and writer on the TV series Preacher, again along with Goldberg; starred in An American Pickle, where he played the roles of both Herschel Greenbaum and his great-grandson; portrayed Santa Claus in the adult animated comedy series Santa Inc.; and teamed with Goldberg and businessman Michael Mohr to found the cannabis company Houseplant.

The man has a rather distinct laugh.

The man has a rather distinct laugh.