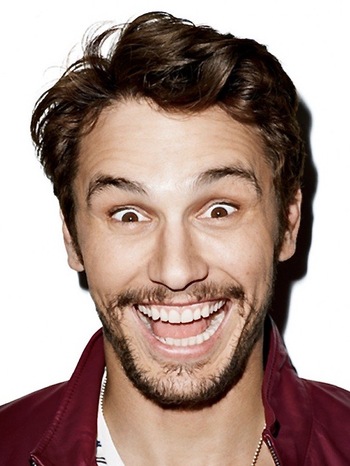 James Franco: Literally about to start Chewing the Scenery.
Advertisement:

His first prominent role was as Daniel Desario on the short-lived Cult Classic TV series Freaks and Geeks. He later achieved recognition for playing the title role in a made-for-TV biopic about James Dean in 2001 (for which he won a Golden Globe Award), and for playing Harry Osborn in Sam Raimi's Spider-Man Trilogy. He is also known for his roles in the films Pineapple Express, Milk, 127 Hours (for which he earned an Academy Award nomination for Best Actor), Rise of the Planet of the Apes, Oz the Great and Powerful, Spring Breakers, and This Is the End. He also had a recurring role in the ABC Soap Opera General Hospital for several years.

In 2017, he directed and starred in The Disaster Artist, based on Greg Sestero's book of the same name chronicling the infamous production of Tommy Wiseau's The Room. Following a Golden Globe win for his portrayal of Wiseau, accusations of sexual misconduct against Franco began surfacing on social media in January 2018. Franco himself has thus far denied all accusations.

His younger brothers, Tom and Dave, are also actors.

After fending off cannibals led by Danny McBride for a while, James Franco gets Raptured by God. However, his "sweet" time of taunting McBride makes God cancel his Rapture trip to Heaven.

After fending off cannibals led by Danny McBride for a while, James Franco gets Raptured by God. However, his "sweet" time of taunting McBride makes God cancel his Rapture trip to Heaven.