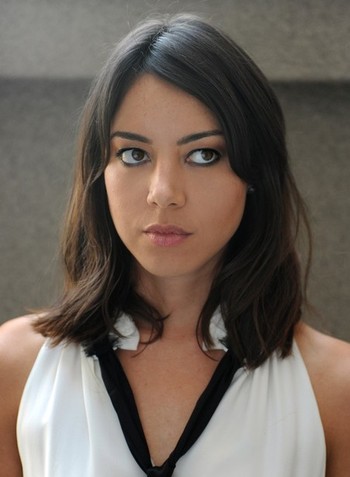 "I just met the weirdest girl I've ever met in my life. You have to meet her and put her on your show."
— Parks and Recreation casting director Allison Jones on Plaza
Advertisement:

Plaza is well-recognized for the trademark Deadpan Snarker and Emotionless Girl personae she brings to many of her projects, both of which were displayed in her Star-Making Role, April Ludgate on Parks and Recreation. Cast while she was interning at a Post-It Note factory, the part was written specifically for her, after casting director Allison Jones' suggestion to showrunner Michael Schur (quoted above).

On the back of her Parks and Rec popularity, Plaza landed roles in films such as Scott Pilgrim vs. The World, Funny People, and Safety Not Guaranteed, and even provided the voice of the well-known feline celebrity and internet meme "Grumpy Cat", in Lifetime's film Grumpy Cat's Worst Christmas Ever.

Though mostly associated with comedic projects, Plaza has also appeared in more dramatic works, notably playing against type as Lenny Busker in FX's Legion (2017), based on the Marvel Comics character of the same name.

Plaza came out as bisexual in 2016. She married her longtime partner, director and screenwriter Jeff Baena, in 2021.

Her career provides examples of the following tropes: