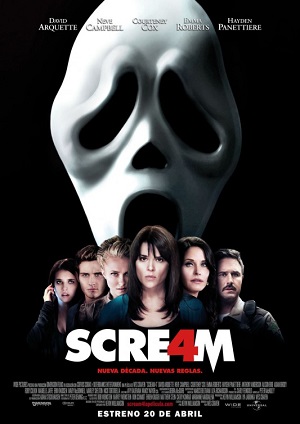 Scream 4 is a 2011 slasher movie directed by Wes Craven, from a screenplay by Kevin Williamson. It is the fourth film in the Scream franchise.

Over a decade since last defeating Ghostface, Sidney Prescott (Neve Campbell) is now living a quiet life back in her hometown of Woodsboro. But when a new Ghostface emerges in time for the fifteenth anniversary of the original Woodsboro massacre, it's not just Sidney's life on the line, but a new generation that includes her cousin Jill (Emma Roberts) as well.

Scream 4 was Wes Craven's final movie, released before his death on August 30, 2015. Intended to start a new sequel trilogy in the franchise, those plans were put on hold due to smaller-than-expected box office returns and the death of Craven, who'd been involved in preliminary development with Williamson prior to its release. This led to the production of a standalone spinoff series (titled Scream: The TV Series) for MTV, which ran for two seasons before being rebooted as a new limited series, Scream: Resurrection, for VH1. A fifth film, titled Scream (2022), would finally be filmed in 2021 and released in 2022.