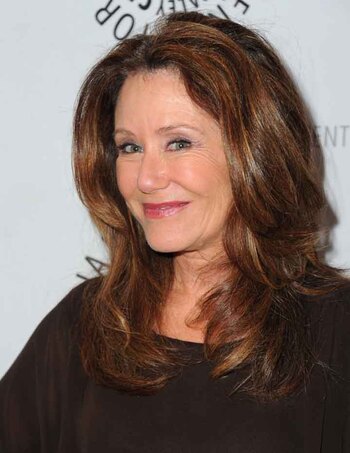 "Actors are part of a certain percentage of people on this planet who have an emotional vocabulary as a primary experience. It's as if their life is experienced emotionally and then that is translated intellectually or conceptually into the performance."
Advertisement:

Mary Eileen McDonnell (born April 28, 1952 in Wilkes-Barrie, Pennsylvania) rose to fame as Stands-with-a-Fist in Dances with Wolves opposite Kevin Costner, a role that earned the actress her first Oscar nod. She went on to give acclaimed performances in both film and television, including Passion Fish, Sneakers, Independence Day, Mumford, Donnie Darko, Margin Call, and ER.

In 2003, however, she became a household name as President Laura Roslin in Battlestar Galactica (2003). Thanks to her talent for simultaneously portraying iron strength and heartbreaking vulnerability, McDonnell became one of the show's best-loved characters and a pillar of the series. Furthermore, her genuine, believable chemistry with Edward James Olmos resulted in an on-screen romance between Laura Roslin and William Adama that has been hailed as one of the greatest in television history. When not even Television Without Pity can bring itself to snark at you... well.

Since Battlestar Galactica finished, her most notable role has been as the cool, collected Captain Sharon Raydor, head of the Force Investigation Division, on TNT's crime drama The Closer. She earned her Promotion to Opening Titles in season 7, and went on to take increasingly prominent role in the storyline - to put it mildly.

She started off in The Closer pretty much as a walk-on role in Season 5, and two years later, she took the helm of the Major Case Squad in a spinoff titled Major Crimes. She's just that good.

She is also noted as one of the nicest, most grounded people in Hollywood, and is highly unlikely to airlock anybody.