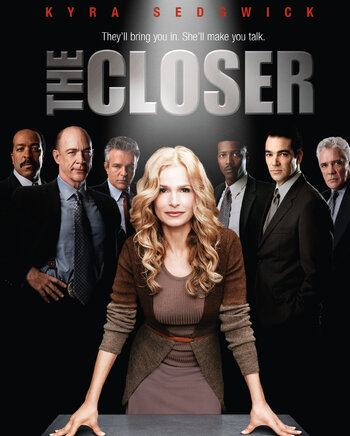 "People may be created equal, but they do not die that way."
— Deputy Chief Brenda Leigh Johnson
Advertisement:

The Closer (2005—2012) was a crime drama on TNT starring Kyra Sedgwick in an Emmy- and Golden Globe-winning performance as Brenda Leigh Johnson, deputy chief of the Atlanta Police Department (and former CIA agent), who transfers to Los Angeles. She leads a special LAPD unit that solves high-profile murder cases, with her supervisor being an ex-lover of hers.

Largely self-contained with several character-driven story arcs (most notably, dealing with Brenda's romance and marriage to an FBI agent, among others), the series began with and maintained considerable popularity and helped TNT, after several high profile failures, successfully launch its own programming block of shows on the network.

The series aired every summer beginning in 2005. The last season aired in 2012, giving the show an seven-year run. It was followed by Major Crimes, starring Mary McDonnell as Sharon Raydor. Most of The Closer's main cast returned for Major Crimes, which takes over its parent show's 9pm timeslot.

Not to be confused with the 2004 film Closer.