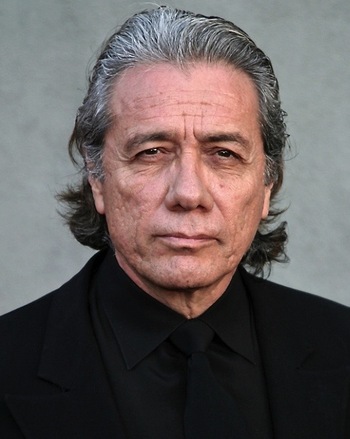 "There is no race but the human race. So say we all."
Advertisement:

Instantly recognizable for his iconic roles, craggy features and authoritative, gravelly voice, Olmos first came to prominence as the mysterious Detective Gaff in the sci-fi classic Blade Runner. Since then he has repeatedly garnered critical acclaim as both an actor and director, and is perhaps most memorable for his roles in Miami Vice, Selena, and Battlestar Galactica (2003). In 1988 he received an Academy Award nomination for Stand and Deliver, in which he played Jaime Escalante, the original Cool Teacher/Stern Teacher combo. You know all those movies about an inner-city school gaining an unusual but inspirational teacher? Yeah, Olmos pretty much originated that role.

Aside from his media career, Olmos is a passionate social activist, political protestor and pioneer for more diversified roles and images of Hispanics in the U.S. media. Following the 1992 Rodney King riots in Los Angeles, Olmos helped to clean up and rebuild communities. He's also the co-founder of the Los Angeles Latino International Film Festival and the Latino Book & Family Festivals, in addition to being the founder of Latino Public Broadcasting. He also makes frequent appearances at juvenile halls and detention centers to speak to at-risk teenagers, and has been an international ambassador for UNICEF.

Basically, Olmos is a seriously cool guy. So say we all.