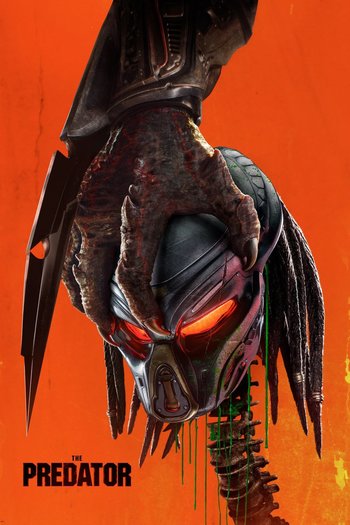 ♫ Guess who's back, it ain't a fuckin' question. They know the name, bow in the presence of a living legend. ♫
"Gentlemen, they're large, they're fast, and fucking you up's their idea of tourism."
— Will Traeger
Advertisement:

The Predator is the fourth mainline installment in the Predator series, released in 2018, directed by Shane Black (who starred as Hawkins in and was one of the writers on the original film) and written by Fred Dekker.

After one of their ships crash-lands on Earth, black ops soldier Quinn McKenna finds himself face-to-face with the universe's most lethal hunter: the Predator. Barely escaping with his life and a few pieces of the Predator's belongings, McKenna is deemed crazy by the government and put on a bus to a military insane asylum.

However, the alien equipment Quinn managed to get his hands on turns out to be far more important than he could have expected, with both the marooned Predator and a second "ultimate" Predator, who's been upgrading itself with the DNA from other species across the stars, soon hunting him to retrieve it. So begins a four-way race between the two opposing Predators, the U.S. government's Men in Black, and McKenna himself, who's enlisted the help of his mentally unstable ex-soldier busmates and a biologist who was studying the Predators, to retrieve the mysterious MacGuffin Quinn sent for safekeeping to his estranged wife and their son.

The film stars Boyd Holbrook as Quinn McKenna, Trevante Rhodes as Nebraska Williams, Jacob Tremblay as Rory McKenna, Keegan-Michael Key as Coyle, Olivia Munn as Casey Brackett, Sterling K. Brown as Will Traeger, Thomas Jane as Baxley, Alfie Allen as Lynch, Yvonne Strahovski as Emily McKenna, Augusto Aguilera as Nettles, and Jake Busey as Sean Keyes. It was released on September 14, 2018. While the film was not a box office success, the franchise would continue with a Distant Prequel, Prey (2022), released on Hulu.

There's tropes? I ain't got time to read!

"We may die, but we're still here. So come and get us, motherfucker."