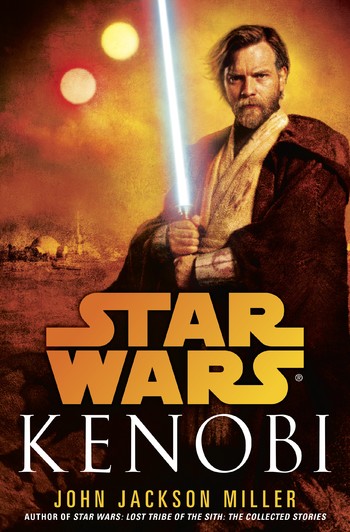 A long time ago, in a galaxy far, far away...
Darkness has fallen on the galaxy. The Emperor has taken control of the Galactic Republic, aided by Anakin Skywalker, once one of the brightest of the Jedi Knights, charged with protecting the helpless. Having fallen to the dark side of the mystical Force, Anakin lives on as the Emperor's ruthless enforcer, Darth Vader.

But hope also lives in the form of Anakin's infant son—protected by Anakin's friend and former mentor, Obi-Wan Kenobi. Kenobi flees with the baby to the remote world of Tatooine, where years earlier Anakin's fall truly began when he vengefully massacred a native clan of Tusken Raiders.

Unaware of that event—and still believing that he killed Anakin in their desperate duel—Kenobi settles into a new role, watching over the child and his adoptive family, the Larses, from a distance. But hiding is difficult for one accustomed to action, and even desert Tatooine has those who require the help of a Jedi...

) is a Star Wars Legends novel by John Jackson Miller, concerning Obi-Wan "Ben" Kenobi's first weeks in exile on Tatooine. Originally conceived as a graphic novel, Kenobi was created in response to a challenge by Miller's editors to do something never before attempted—Star Wars as a Western, with Obi-Wan as The Drifter, Determined Homesteader moisture farmers, and Tusken Raiders subbing for Indians. It takes place just after Revenge of the Sith and concurrently with Dark Lord—The Rise of Darth Vader.

The Republic has fallen, and all Obi-Wan Kenobi wants to do now is settle in on the desert planet of Tatooine and watch over the young Luke Skywalker from afar. The last thing he wants is to attract attention, but for the insular moisture farmers of the desert, the mysterious "Ben" is a source of endless fascination—and a catalyst that brings long-simmering tensions to the fore, both between the farmers themselves and with their longstanding enemies, the Tusken Raiders...

Annileen Calwell is at the center of life in the Pika Oasis, having taken over Dannar's Claim, the local general store and cantina, from her husband after his death at the hands of the Sand People. Managing her two children, her husband's old friend and business partner Orrin Gault, and the rest of the regulars at the Claim leaves Annileen no time for dreaming, but when Ben appears out of nowhere to save her daughter from a runaway dewback, she starts to wonder if there could be more to her life after all...

Witnessing Ben's strange powers, Tusken warrior A'Yark sees in the new arrival a hope for her demoralized and desperate people. Many years before, a wizard with a shining weapon had joined the tribe and led them to new heights, and now, perhaps, another has come to rally the Sand People and bring them to victory...

Published in 2013, Kenobi is one of the last novels released in the old Expanded Universe (now Legends) before the Continuity Reboot of 2014. John Jackson Miller would go on to usher in that reboot with the first novel of the new Star Wars Expanded Universe, A New Dawn. One of the characters would also feature in the From a Certain Point of View short story "Rites" as part of the new canon, so (as with James Luceno and Tarkin) one could consider it deuterocanonical, in that the author has referenced it and it doesn't openly contradict later stories.

The prequel short story “Incognito” was published in Star Wars Insider magazine as a tie-in, and included with the Kenobi paperback and e-book editions. On his way to Tatooine, Obi-Wan prevents the arrest of a dissident Senator, and convinces him to return to Coruscant to resist the Empire in secret.