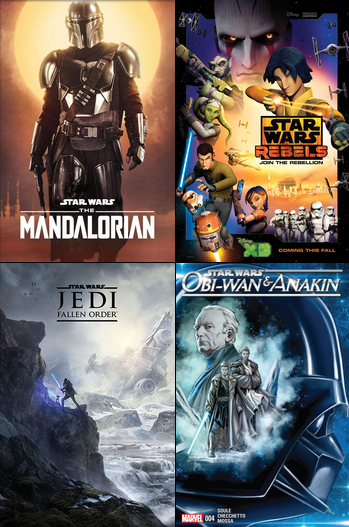 The Expanded Universe underwent a Continuity Reboot on April 25th, 2014 after Disney's acquisition of Lucasfilm; the original six theatrical films and Star Wars: The Clone Wars remained canon and became part of (along with serving as the basis) the new Star Wars Canon as result of being created by or directly involved with George Lucas while all of the other previous works here

were declared non-canon. Any new installments created by Lucasfilm since 2014 (unless said otherwise) will be part of the canon as well.

Though the old EU continuity is now locked* with the exception of the ongoing MMORPG Star Wars: The Old Republic, it remains in circulation under the title of Star Wars Legends.

The old Expanded Universe has been formally discontinued; however, BioWare and Fantasy Flight Games continue to publish new content for respectively Star Wars: The Old Republic and the Star Wars Roleplaying Gamenote Curiously, it contains a hybrid of information from the new Expanded Universe and from Legends, which technically places it into a pseudo-canon category. Fantasy Flight's plot-free tactical games Star Wars Armada and X-Wing Miniatures do the same. despite this.

Details on the the works that made up the old Expanded Universe, and the tropes contained therein, will be covered here.

The new Expanded Universe (The Canon)

Due to the player-centric nature of these games, most are pseudo-canon unless stated otherwise.

In April 2014, virtually all of the Expanded Universe was declared non-canon to the upcoming third trilogy. Only the theatrical films, Star Wars: The Clone Wars, and new material released after this point will be considered canon (as listed above). However, the old Expanded Universe remains a resource used as a frame of reference for future material, at the discretion of their writers and the new Lucasfilm Story Group. In fact, the "new" Expanded Universe is in and of itself a misnomer — everything from this point on is simply being referred to as being either "Canon" or "Legends" in order to reflect the fact that everything is being approved by Lucasfilm.

Will contain heavy spoilers for The Mandalorian, Star Wars Resistance, Marvel Star Wars, and all recently released books. Browse through at your own caution.