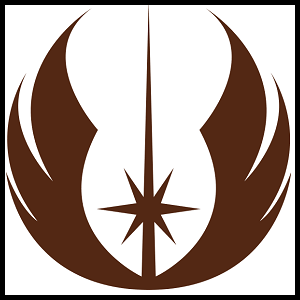 "A Jedi uses the Force for knowledge and defense, never for attack."
—Grand Master Yoda

The Jedi Order was a noble, religious order of protectors united in their devotion to the Light Side of the Force. With a history dating back thousands of years before the rise of the Galactic Empire, the Jedi—noted for their lightsabers and natural ability to harness the powers of the Force—stood as the guardians of peace and justice in the Galactic Republic. Due to the machinations of their dark antithesis known as the Sith, the Jedi Order was ultimately wiped out by the iron fist of the Empire following the execution of Order 66, which resulted in a handful of survivors going into hiding across the galaxy. 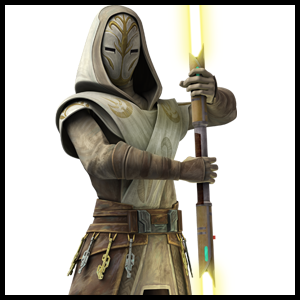 The Jedi Temple Guard was a security force maintained by the Jedi Order and tasked with the protection of the Jedi Temple on Coruscant, the capital planet of the Galactic Republic. An ancient and honored tradition in Jedi history, the Temple Guards were Jedi Knights plucked from the ranks to become anonymous sentinels as part of their lifelong commitment to the Order. They carried special lightsaber pikes which produced yellow blades. They were led by Jedi Master Cin Drallig, the head of security.

See his entry on the Jedi Masters page.
"The Sentinel"

"The Sentinel" /The Grand Inquisitor

See his entry on the Inquisitorius page.

A contemporary of Dooku, Arath was a Jedi diplomat who was regarded as an incompetent and irresponsible knight by the Order.

See her entry as part of the Crew of the Stinger Mantis.
Finn Ertay 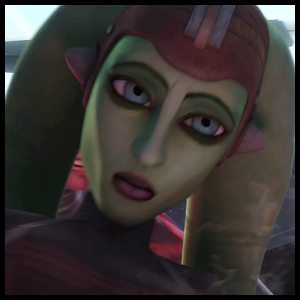 Finn Ertay was a Twi'lek female who served as a Jedi during the Clone Wars. She was killed during a lightsaber duel with Darth Maul. 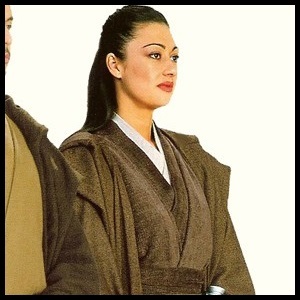 Portrayed by: Zuraya Hamilton
Appearances: Darth Maul | Attack of the Clones
"Careful, my young Padawan. The shadows hold great rage... constrained, but so deep it might swallow you whole."

Khaat Qiyn was a human female Jedi that served the Jedi Order before the Clone Wars. She and her Padawan were among the Jedi sent to the Battle of Geonosis at the beginning of the Clone Wars.

A student of Count Dooku. At one point before the Trade Federation's invasion of Naboo, Rael requested Qui-Gon and Obi-Wan to settle a dispute on Pijal, where he served as Lord Regent for Princess Fanry. 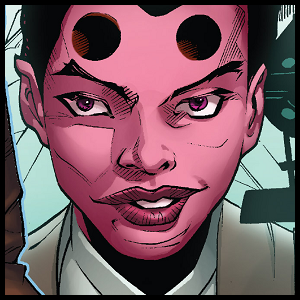 Appearances: Jedi of the Republic

A recently promoted Jedi Knight. Her engineering and piloting skills caused her to gain recognition from Mace Windu and the Jedi Council, allowing Master Windu to recruit her on a reconnaissance mission to Hissrich during the early stages of the Clone Wars. 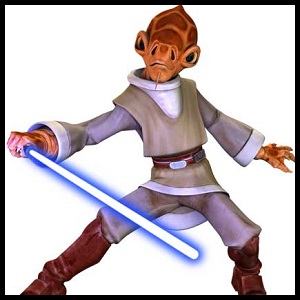 Voiced by: Tom Kenny
Appearances: The Clone Wars
"But in this war, strength prevails. The rules have changed."

Nahdar Vebb was a Mon Calamari Jedi Knight who lived during the final days of the Jedi Order and the Galactic Republic. He was trained as a Jedi by Kit Fisto, with whom he reunited on the third moon of Vassek. Along with several clone troopers under Clone Commander Fil, the Jedi discovered the lair of General Grievous. During an attempt to capture the cyborg general, Vebb engaged Grievous in a lightsaber duel and was killed by Grievous shooting him.

Akar-Deshu was a Mahran Jedi Knight and friend of Jedi Master Quinlan Vos. 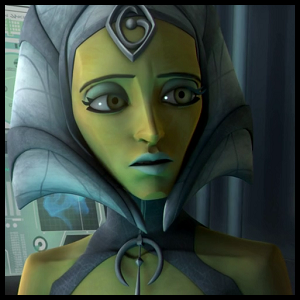 Rig Nema was a female Consular Jedi doctor who served the Jedi Order during the Clone Wars, the full-scale conflict between the Galactic Republic and the Confederacy of Independent Systems. At some time during the war, one of Doctor Nema's patients was Grand Master Yoda, who had started to hear the disembodied voice of the late Master Qui-Gon Jinn via the Force, much to the Jedi Council's concern. 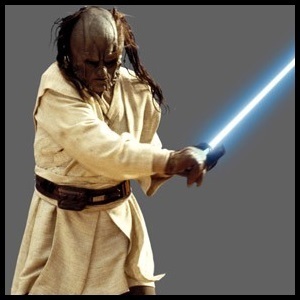 Portrayed by: ???
Appearances: Attack of the Clones | The Clone Wars

Sora Bulq was a Weequay Jedi who served the Galactic Republic and the Jedi Order during the Clone Wars against the Separatists.

In order prioritizing promotion/ranks, then chronological appearance, and then age/experience/skill. 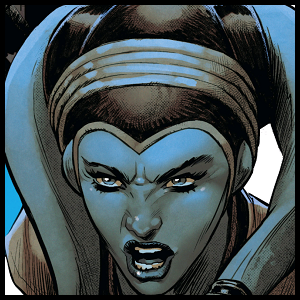 Appearances: Darth Maul
"You think you scare me? You're the one lurking in the shadows... keeping who you really are secret. You're the one whose scared."

Eldra Kaitis was a young Twi'lek female Padawan. Prior to the Invasion of Naboo, Eldra was captured by the Xrexus Cartel's boss, Xev Xrexus. The apprentice of Darth Sidious, Darth Maul, learned of Eldra's capture and searched for the Padawan before she could be auctioned off, wanting to test his abilities against her. 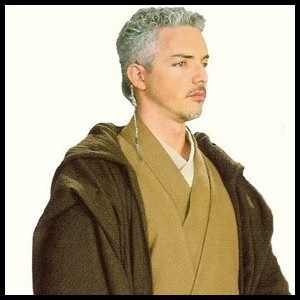 Bairdon Jace was the male human Padawan of Khaat Qiyn before the Invasion of Naboo and the Clone Wars. He and his master were part of the assault team that fought at the Battle of Geonosis.

See her entry on the Fallen Jedi page.
Ferren Barr

"Once the galaxy sees what the Empire is capable of, they will resist."

Appearances: Dark Lord of the Sith
"The past does not die. I study the past, you see. It's all I've done since I went into hiding after the purge. I tracked down every bit of information about how Palpatine tricked the galaxy."

Ferren Barr was a Iktotchi Padawan who, along with a handful of rebels he recruited, managed to hide out on Mon Cala following Order 66. 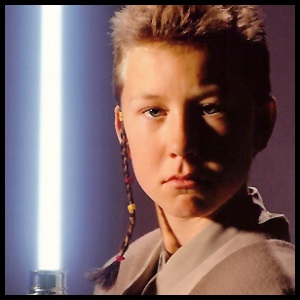 Portrayed by: Jett Lucas
Appearances: Attack of the Clones | Revenge of the Sith

Zett Jukassa was a young Padawan who was at the Jedi Temple when Order 66 was issued. His death was witnessed by Senator Bail Organa. 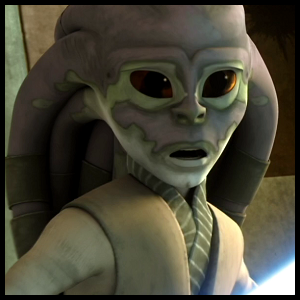 Knox was a Nautolan Jedi Padawan apprenticed to Jedi Master Halsey during the Clone Wars. Alongside his master, he partook in the Republic defense of the Temple of Eedit on the planet Devaron. The two were initially successful in defeating the battle droids, but were killed by Savage Opress after he entered the battle.

See his entry as part of the Crew of the Stinger Mantis.
Sammo Quid 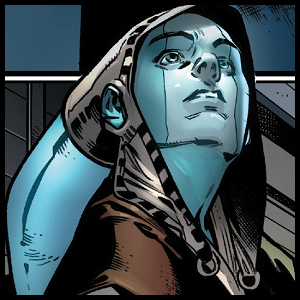 A male Initiate that was classmates with Caleb Dume and Tai Uzuma. 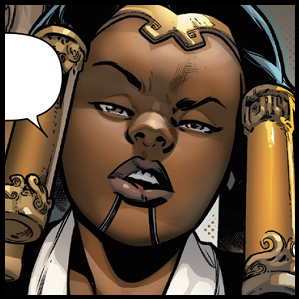 A female Initiate that was classmates with Caleb Dume and Sammo Quid. 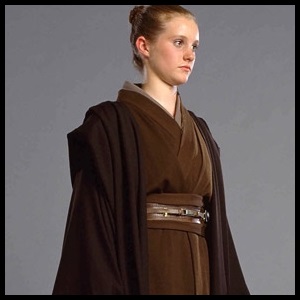 Portrayed by: Mousy McCallum
Appearances: Revenge of the Sith

A female Padawan killed by Darth Vader when he and the 501st marched to the Jedi Temple on Coruscant during the Jedi Purge. 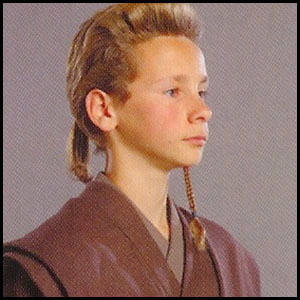 Portrayed by: Coinneach Alexander
Appearances: Revenge of the Sith

A male Padawan killed by Darth Vader when he and the 501st marched to the Jedi Temple on Coruscant during the Jedi Purge. 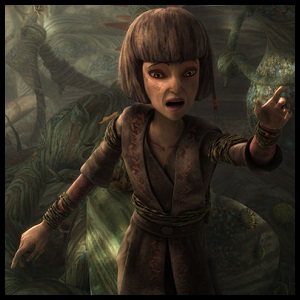 Voiced by: Gwendoline Yeo
Appearances: The Clone Wars
"We are not saviors here. Here, we are survivors."

Kalifa was the eldest of three Jedi Younglings who had been kidnapped by Trandoshan sport hunters sometime preceding or during the Clone Wars. By the time the similarly captured Ahsoka arrived at the island they were held on, the three of them were losing hope, as their strength was enough only to hide and try to avoid being shot down for as long as possible. 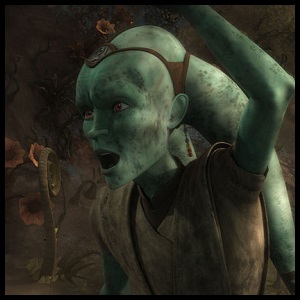 Jinx was a Twi'lek Jedi youngling who served in the Jedi Order during the Clone Wars. He was captured by the Trandoshans alongside Kalifa and O-Mer. 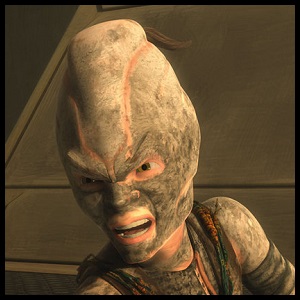 O-Mer was a Cerean Jedi youngling. Along with fellow younglings Kalifa and Jinx, he was captured on a training mission by Trandoshan hunters. The trio were deposited on the Trandoshan moon of Wasskah, where they were hunted for sport. He would escape the hunters' moon with the help of Padawan Ahsoka Tano.

This group of younglings participated the Gathering, a Rite of Passage, during which they harvested their own Kyber crystals. During the rite, they had to face and overcome their shortcomings and weaknesses. Afterwards, they learned how to built their first lightsabers from Professor Huyang. Their training in the Jedi Temple was apparently overseen by Tera Sinube. 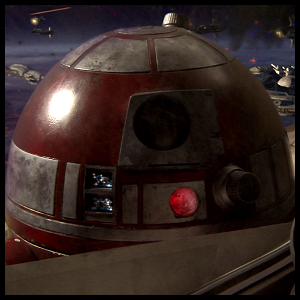 Appearances: Attack of the Clones | The Clone Wars | Revenge of the Sith

R4-P17, nicknamed Arfour, was an astromech droid, programmed with a female personality, that was assigned to Jedi Master Obi-Wan Kenobi prior to and throughout the Clone Wars. She was destroyed by a buzz droid during the Battle of Coruscant.

Appearances: Revenge of the Sith

R4-G9 was Obi-Wan's replacement astromech droid following R4-P17's destruction in the Battle of Coruscant. She accompanied him to Utapau during the hunt for General Grievous. 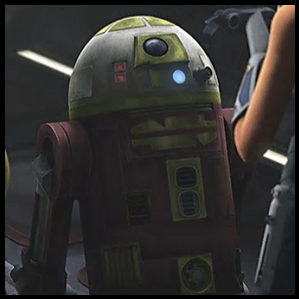 R7-A7 was Ahsoka's astromech droid during the Clone Wars, serving her from the Battle of Ryloth all through the end of the war, where he was killed by clone troopers during the execution of Order 66. 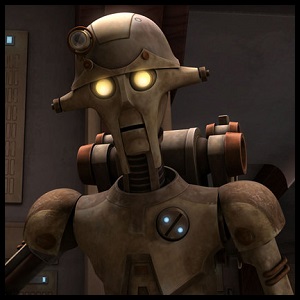 Voiced by: David Tennant
Appearances: Age of Republicnote flashback only | The Clone Wars
"You must trust that the components that form your lightsaber are meant to be together; there is no other way. It is the Force that binds them."

Huyang was a Mark IV architect droid professor based aboard the Jedi vessel, the Crucible, who for a thousand generations had taught Jedi younglings, one of them being the future Grand Master Yoda, how to build their lightsaber following the Gathering. 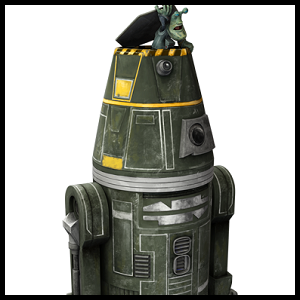 M5-BZ was the personal droid of Jedi Master Tera Sinube. Beezee was assigned to D-Squad during the Clone Wars. 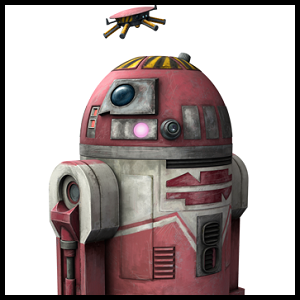 QT-KT was the personal droid of Jedi Master Aayla Secura. Qutee was also assigned to D-Squad during the Clone Wars. 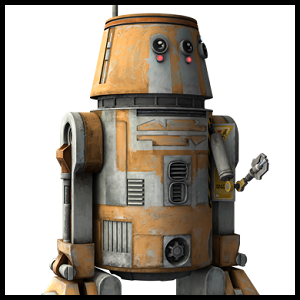 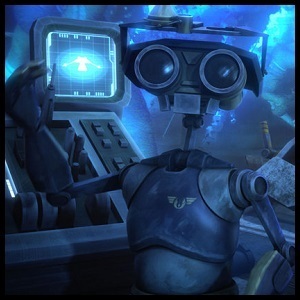 Voiced by: Dee Bradley Baker
Appearances: The Clone Wars
"I am Russo-ISC, crime scene analyzer for the Jedi."

Russo-ISC was a droid in the Galactic Republic that worked for the Jedi Order as a crime scene analyzer. He participated in the investigation of the bombing of the Jedi Temple hangar.

Appearances: Dark Lord of the Sith
"I have spent time with many Jedi here, over the years, and I would like to believe I have absorbed some small piece of their wisdom."

A Jedi training droid stationed at the Jedi outpost on the river moon of Al'doleem. By the time of Order 66, the only Jedi left to accompany on the outpost was Jedi Master Kirak Infil'a, who had taken the Barash vow. 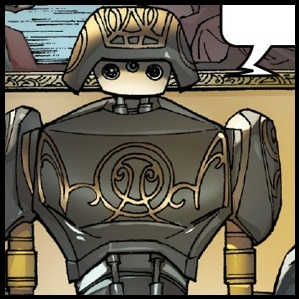 A droid assigned to defend a hidden vault filled with the Jedi Order's most important artifacts. 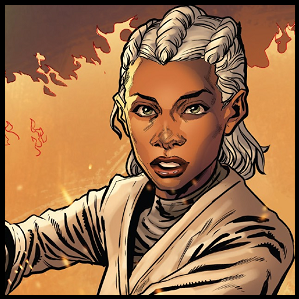 One of Luke Skywalker's Jedi students. She is devoted to her master and quick to turn on Ben Solo when she learns he allegedly killed him.

A Jedi apprentice of Luke Skywalker, who survives the destruction of the Jedi Temple and sets out to find Ben Solo in the hopes of helping him.

A Quarren apprentice of Luke Skywalker's, who was offworld during the destruction of the Temple. 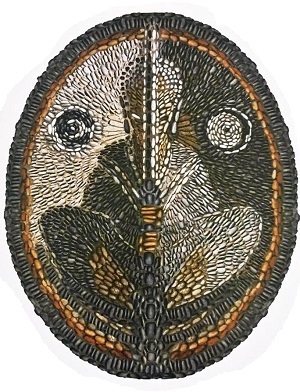 The very first member of the Jedi Order.

See his entry on the Mandalorians page under Historical Figures.
Rur

See his entry on the Other Force-users and Beings page.
Rur's unnamed opponent

Appearances: Doctor Aphranote flashback
"Your heresy is over."

The leader of an assault against Rur and his followers of the Ordu Aspectu in the Fortress of Garn. This attack ultimately failed, with her and the fate of other Jedi participating in the attack being unknown.