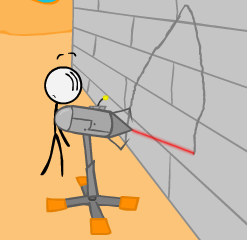 One of the best known uses of the modern laser is as a high precision metal cutting tool. Whether by using a very powerful laser capable of vaporizing metal, or by using a low power laser to guide a tungsten cutter, the laser was quickly adopted in metalworking for its ability to cut with micrometric precision. At a smaller scale, surgeons will sometimes turn to lasers for their cutting rather than a "knife" or scalpel. In this case, the laser is usually vaporizing watery tissue or disrupting molecular bonds more than "cutting" but the appearance is the same. Smaller lasers are also used by artists, architects and engineers to cut plastic, fabric or cardboard for dioramas, fine projects and printed circuit boards.

As a result of all these cutting-related applications, the cutting aspect has really caught on in fiction, where lasers go beyond scalpels and take the place of pickaxes, drills, saws, or razor wire — despite the fact that lasers are also used to reshape surfaces, close wounds, irradiate cells, pointing out areas without intending to affect them, or even to just calibrate measuring tools or for measuring distance and speed.

Laser cutters have become common in industry and are beginning to come down in price enough for schools and hobbyists (as have plasma cutters, which often get lumped in). They have a long way to go to the easy portability or versatility seen in fiction however. The laser blade took on a life of its own, becoming a subtrope.

The part about going beyond knives and scalpels is Truth in Television too, we now have a laser drill on frikkin' Mars.

Contrast Weld the Lock, for when lasers and similar things are used to seal doors shut.