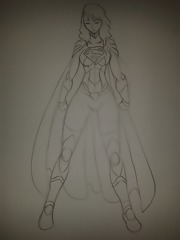 "I always knew there was something strange about me, I guess."
You will believe Taylor can fly.
— FF.net Summary
Advertisement:

Taylor Hebert was born and raised in Brockton Bay, or so she thought. Growing up, she began to realize that she could see and hear things that no one else could, she never grew sick, and she never got so much as a scrape on the knee. Nonetheless, she simply concealed that part of her and enjoyed a relatively normal (if isolated) life...

...until she and Emma are attacked in an alleyway by ABB thugs. To her surprise, she manages to brutally fight off the attackers and save Emma. Terrified, she runs home and reveals what happened to her father, who in turn reveals a secret about her birth...

"The Last Daughter" is a Worm/Supergirl crossover by Thuktun Flishithy (author of Hail to the King) that makes Taylor the last living Kryptonian, named Zara Jor-El at birth, instead of a parahuman. Inspired by a message left by her birth father, she decides to become a hero, bringing her into conflict with the various villains of Brockton Bay.

This story can be found in FF.Net

The Last Daughter received a Mega Crossover sequel and a rewrite: CRISIS and The Girl of Tomorrow, respectively.

Compare and contrast with Echoes of Yesterday, the other main Worm/Superman crossover.

In spite of the similar name, it has nothing to do with the Last Daughter of Krypton story arc.

The Last Daughter provides examples of: