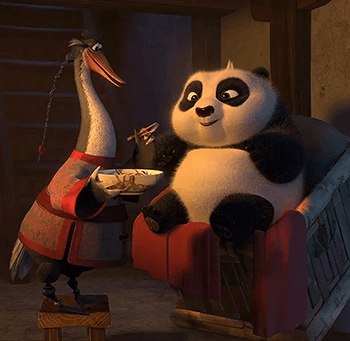 Even in settings where talking, civilized, or funny animals exist, adoptions will still happen between parents and children. Some parents are caring enough to take in a child, regardless of their species. They may be animals raising a human child, humans raising an animal child, animals raising animals of a different species, or any combination of the three. It doesn't matter, as adoption is still adoption, and parents will always be parents. The subject of the adoption may or may not even be an issue among society.

It may also overlap with Moses in the Bulrushes and (especially in comic settings) Oblivious Adoption. Contrast Random Species Offspring when the child isn't just adopted - it's biological. In works where both the species are sapient, such adoptions are frequently allegories for real life interracial adoption, as in both situations the adopted characters will have to deal with the physical and often cultural differences between them and the rest of their family.

There are numerous cases of this happening in real life among different animal species, even among animals that would normally eat one another. There are also many accounts, though few if any verified, of children while lost in the wilderness being protected or even raised by animals. Also given that humans are technically animals as well, raising pets also counts.