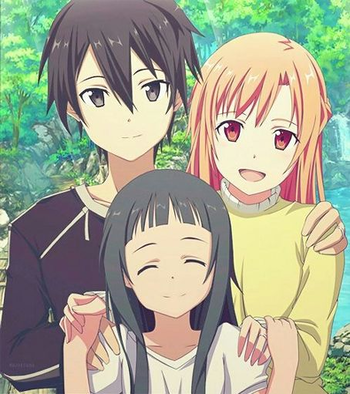 No less loving a family than any other.
Ted: [whispering to Bill] Your stepmom's cute.
Bill: Shut up, Ted.
Ted: Remember when she was a senior and we were freshmen?
Bill: Shut up, Ted!
— Bill & Ted's Excellent Adventure
Advertisement:

Parents in fiction rarely look old enough to have children of the age shown. Sometimes this is because of a Teen Pregnancy, or Soap Opera Rapid Aging Syndrome, or some form of time travel or immortality. Sometimes, it's for a more mundane reason. The parents remarried, adopted, or gained custody of the suspiciously old child through other means that justify the age discrepancy. Basically, this trope occurs when a relatively young person (usually in their teens or early 20s) gets a Promotion to Parents over other characters who are roughly the same age as themselves.

See also Absurdly Youthful Mother and the other subtropes, especially Mum Looks Like a Sister. Compare Promotion to Parent, which usually falls under this trope. Contrast Adult Adoptee, where an adult adopts another adult into the family.