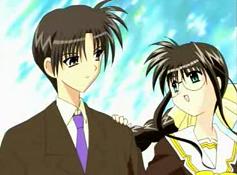 "It's those weapons. Why in this day and age are you so set on using knives and katana?"
"I'm not set on using them."

Also known as Triangle Hearts Sweet Songs Forever, depending on which piece of merchandise you're looking at.

The third entry in the Triangle Heart eroge series, which, like its predecessors, focuses on one boy and two girls trained in an ancient fighting style, the supernatural phenomenon surrounding them, and the threats that greed, lust and power present.

The titular triangle is formed by Kyouya Takamachi, only living heir to the Fuwaryuu sword style and also practitioner of the Mikamiryuu style; his "sister" Miyuki (actually his cousin), whose mother gave her to her uncle (her mother's brother) and ran off to seek revenge against the man that killed her family; and Fiasse Crystela, an Idol Singer and long-lost childhood friend who has hurt her voice and is staying at their house.

Kyouya's father, Shirou, was killed by the same (supernatural) terrorist organization that once killed off the rest of his family save for Kyouya, Miyuki, and her mother, and now they set their sights upon the main trio. Kyouya has to stop them, as well as work out his friends' more-than-mundane problems. It helps that they work for a clandestine special defense anti-terrorist force forged from an alliance between China, Japan and the United States.

There is also a 4-episode OVA that takes place after the game. Fiasse is back on tour, but has received death threats, so, naturally, she calls upon the Takamachis. Her real bodyguard, Elise MacGaren, absolutely refuses to let some amateurs she knew as a child take her place, and begrudgingly agrees to work with them, provided they stay on the sidelines. Elise uses a gun and insults Kyouya and Miyuki's insistence on the sword, despite quickly learning how much better off they are with katanas. But there's still something that she doesn't want to face, and seeing those two again is far too painful.

However, this novel is probably best known for introducing Kyouya's adorable eight-year-old sister Nanoha Takamachi. Starting out as a satellite character with little relevance to the plot, she proved popular enough to be given her own Magical Girl spinoff game, and then an anime...which eventually took off and became an entire multiverse of its own.

This game and OVA provide examples of:

And now you know where Nanoha got it from.