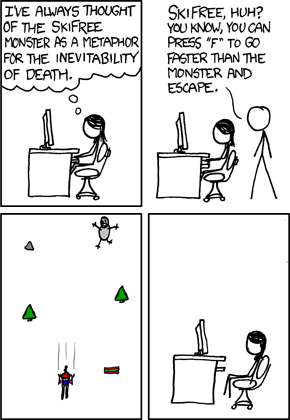 One character makes an analogy comparing two things, often intending to make one of them sound positive or inspirational. Another character then deconstructs the analogy by pointing out a further fact about it, which changes or even inverts its original meaning.

A common example is someone comparing two lovers to Romeo and Juliet, unaware or forgetting that the play ends with the two lovers killing themselves.

On the other hand, clues that the original speaker might actually be aware of the real nature of the analogy are fertile breeding grounds for Alternative Character Interpretations and Fridge Logic.

A rare subversion is to have the guy providing the analogy bringing additional facts that make the original analogy still work or demolishes the other guy's attempt to make it backfire ("...just so you know, Romeo and Juliet wouldn't have ended up killing themselves if the freaking mailman had delivered on time!").

Compare Metaphorgotten, Sidetracked by the Analogy, Dissimile, What Did You Expect When You Named It ____?, Insult Backfire, Rhetorical Question Blunder, and Bad Omen Anecdote. Contrast So Was X. A wiseguy is likely to invoke this trope whenever met with a "Jump Off a Bridge" Rebuttal.

Rafael uses the common analogy of Romeo & Juliet to describe Blu and Jewel. Unlike most examples Rafael himself lampshades and deconstructs the flaw of his own analogy.

Rafael uses the common analogy of Romeo & Juliet to describe Blu and Jewel. Unlike most examples Rafael himself lampshades and deconstructs the flaw of his own analogy.