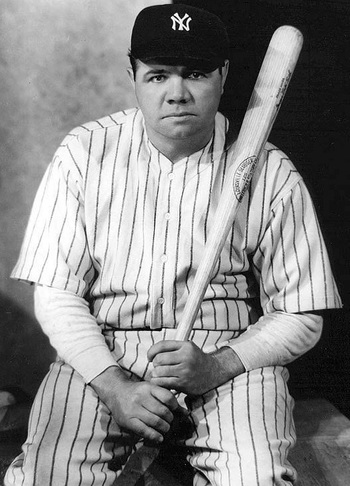 "The Bambino" and the "Sultan of Swat", George Herman "Babe" Ruth Jr. (February 6, 1895 – August 16, 1948) is widely acknowledged as the greatest Major League Baseball player of all time. It was not only that he set almost every batting record; it was how he set them. For example, at the time of his retirement, his 714 home runs was twice the total of the hitter in second place. Further, not only did he hit for power, he hit for average as well; his .342 is #10 all-time, and he is one of only two players (the other being Ted Williams) to have both 500+ home runs and at least a .333 batting averagenote  His teammate Lou Gehrig came close, with .340 and 493 homers — this despite spending the first five years of his career as a pitcher.

Off the field, however, he was also known for his forays into radio and film, in most cases appearing As Himself. While hardly the most prolific actor, his baseball reputation did carry over to much of his other work.

Due to a combination of cancer and his habitually poor lifestyle (with lots of drinking and eating), he passed away in 1948 at the age of 53.