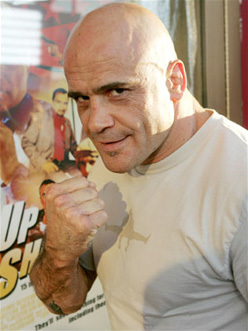 "Dengity dengity deng."note Rutten's memetic way to call his attacks in his hilarious self-defense instructional.
"His kickboxing was devastating. It was something everybody feared. The other thing he had was a basic understanding of real fighting. I consider Pancrase a sporting activity. Bas had that street fighter mentality."
—Frank Shamrock about Rutten
"Apparently, the only way to kill a lion is by rear naked choke. Personally, I'd just kick it in the head."
—Bas Rutten reciting his philosophynote Joke explained: in traditional Brazilian Jiu-Jitsu, the rear naked choke is known as "Mataleão" or "Lion Killer".
Advertisement:

Sebastiaan Rutten (born February 24, 1965 in Tilburg, Netherlands) is a Dutch Mixed Martial Arts fighter, professional wrestler and sport commentator. He started his career training in several martial arts and competing in professional Kickboxing in Holland, but he left the business for being mistreated by promoters. Bas then turned his attention to MMA thanks to Chris Dolman of Fighting Network RINGS fame, and got recruited by Japanese wrestlers Masakatsu Funaki and Minoru Suzuki for their rising promotion Pancrase. Despite debuting there as a dangerous kickboxer, Rutten found himself struggling against the predominant grapplers of the company, so after his first defeat by submission, he devoted himself to a makeshift grappling training. Over time, his new attitude paid off, and Rutten became one of the strongest fighters of Pancrase, amassing win after win and capturing the King of Pancrase Openweight Championship twice (counting an unification fight). With names like Funaki, Suzuki, Frank Shamrock, Guy Mezger and Maurice Smith in his palmares, he left Pancrase unbeaten and went to make himself a name in United States for Ultimate Fighting Championship. His career there, though decorated with another championship, was brief and controversial, and he retired shortly after by injuries and battle wear. Bas then returned to Japan to work as a commentator for PRIDE Fighting Championship, making a memorable pair with Stephen Quadros, and also wrestled in New Japan Pro-Wrestling. Currently, he works as a commentator and guest for several media.

"Tropes to the Liver":