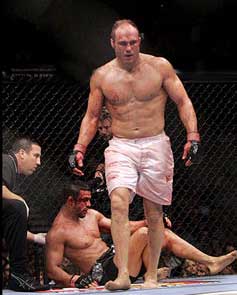 He's been doing this for 13 years.
Advertisement:

Randall "Randy" Duane Couture (born June 22, 1963 in Everett, Washington) is a retired UFC fighter and former 5-time champion in two different weight classes, and one of the most recognizable stars of mixed martial arts. Starting his MMA career relatively late, Couture moved to MMA from Greco-Roman wrestling after thrice being an olympic alternate, but never making the competition team. Couture is a legend in the young sport, known for overcoming long odds and having the strength and athleticism of a much younger man well into his 40s.

He has tried to break into acting with mixed success. Although he had a co-starring role in a sequel to The Scorpion King, his best known role is as Toll Road in The Expendables. His acting is...rudimentary at best, but Randy Couture does a great fight scene. Besides film and television, Couture also appeared in the 2008 real-time strategy video game Command & Conquer: Red Alert 3 as Commander Warren Fuller, playing alongside fellow MMA veteran Gina Carano who portrayed the Soviet commando Natasha Volkova.

Though his last title fight was against Brock Lesnar in November of 2008, Couture remained an active competitor and dangerous foe in the UFC until his retirement in April of 2011 at the age of 47.

Tropes associated with Randy "The Natural" Couture include: