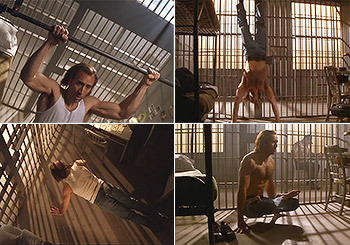 "Well I'm goin to the place where the tough guys go
And come out even tougher."
— Social Distortion, "Prison Bound"
Advertisement:

This trope is when people use time in prison as a way to get in shape, or even Take a Level in Badass.

Prison is a brutal environment, where "survival of the fittest" is in full effect. The generally violent nature of prison life also gives inmates a major incentive to stay in as good a shape as possible; their lives might very well depend on it. There's also the fact that a prisoner often spends most of his time locked in a small room with minimal furnishings (so that they cannot be turned into weapons or escape tools), so they might spend a lot of time working out for lack of anything else to do. In real life, prisons, even the maximum security ones, feature gymnasiums, and sports fields such as basketball courts. However, this trope usually involves the prisoners working out in their own cells, often in secret - especially if it's preparing for busting out.

Since feeding prisoners costs money and prisoners are considered the scum of society, they are often given a diet which is barely enough to sustain life, especially in stories set in ancient times or in societies with a harsh government. This means it can sometimes require Willing Suspension of Disbelief if a character actually manages to physically bulk up in prison. Though as some prison reality shows and documentaries will point out, inmates often trade and bargain with other inmates to get more food to get around this, and even if that's not shown to be the case, it's believable if all they're doing is cutting the flab, exercising the muscles they've already got, and getting some very interactive lessons in learning how to fight dirty.

Characters who're already tough as nails might use the time to read a lot of books. So the lesson is, however you go in, fictional prison is a Badass Bookworm factory.