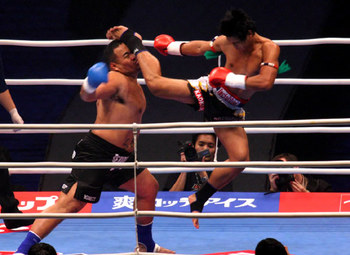 Sweeter than the sweet science.
Kickboxing is a combat sport, or rather an umbrella term for several competitive martial rulesets, based around punching and kicking. It could be intuitively described as "boxing, only with kicks (and possibly other strikes)".
Advertisement:

Unlike other combat sports, kickboxing is hardly an unified discipline: it developed under several forms in very disparage countries and time periods, often with little to no direct contact to each other, which resulted in a myriad of circuits that only gain the appellative of kickboxing by sharing a vaguely similar punch-and-kick ruleset. To blur the lines even more, many traditional martial arts contain elements that would fit this definition as well, like Karate, Muay Thai, Taekwondo and some more, with several of them having contributed actively to their nearest kickboxing style. In synthesis, it is more correct to talk about kickboxing forms, just as "wrestling" can convey a variety of fighting systems instead of an overarching sport.

The term "kickboxing" was a Gratuitous English term created in The '60s by Osamu Noguchi, a Japanese promoter that codified most of the aspects we associate with modern kickboxing. The discipline he would go to promote was shaped by Tatsuo Yamada, a karateka who became fascinated with the full contact nature and liberal rules of muay thai. With their influence and that of several publicized challenge matches between karatekas and nak muay, Japan saw the creation of a Kickboxing Association and the rise of a new, exciting professional sport, whose popularity exploded right then and didn’t burn off completely until The '80s. Even then, the seed remained deeply planted, and when Akira Maeda and his collaborators broke off from Professional Wrestling to entertain the idea of real fighting, the return of kickboxing was one of its consequences. With the help of Maeda, a modernized organization named K-1 blossomed, attracting fighters from around the world and exploding in its own boom of fighting culture, dream matches and bone-breaking kicks.

At the same time, United States witnessed a similar evolution. Although some minor martial artists had attempted to create something similar, it was again a disenchanted karateka from The '70s, Joe Louis, who had the idea (inspired by his training under Bruce Lee) to combine elements of karate and boxing. His creation was initially conceived as a form of full-contact karate, with the term kickboxing being an exotic term that ended up sticking; it was not until the founding of the Professional Karate Association (PKA) and the World Kickboxing Association (WKA) that their road became bifurcated and took separate directions. Other acronyms like IKF and ISKA appeared around this time, shaping it as a relatively popular competition circuit. It is interesting to note that, despite its revolutionary beginning, American kickboxing would differentiate itself from foreign forms by its conservative ruleset, which forbad kicks around the waist and barely allowed striking tools other than fists and feet. This would be a further point of evolution when one of its main stars, Benny "The Jet" Urquídez, made contact with muay thai fighters.

Meanwhile, the rest of the world was taking its own notes. Dutch martial artists influenced by Jon Bluming discovered in mid-80s the remnants of the Japanese circuit and its Thai neghbours, and after deciding it was the coolest thing around, they put their efforts in learn whatever they could and recreate with their own arts what they could not. A long tradition of kickboxers started there, marked by but not limited to a legendary rivalry between Thom Harinck's Chakuriki team and Jan Plas's Mejiro Gym. With the rise of K-1 and the the Japanese branch of Mixed Martial Arts, those Dutch badasses decided to give back more than they had taken and joined them in the journey.

Nowadays, the main styles or forms of kickboxing are the following ones. Note again that, as mentioned before, traditional martial arts like muay thai and karate can be considered kickboxing modalities as well.