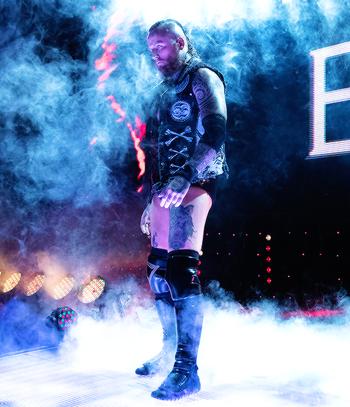 Aleister Black (real name Thomas Budgen, born May 19, 1985) is a former kickboxer turned professional wrestler hailing from Alkmaar, North Holland, The Netherlands, who is currently signed with All Elite Wrestling after being released by WWE on June 2, 2021. He has performed all over the world, most recently on the WWE Raw brand. He was trained by Chris Hero, Bob Schrijber, Johnny Kidd, Mike Quackenbush and Nigel McGuinness.

After being released from WWE, he showed up on the 7th of July episode of AEW Dynamite now going under the name Malakai Black.note This

was due to the fact that when Tommy was moved to the main WWE roster in 2019, the company failed to update his contract from the standard 30 day non-compete that NXT level talents receive to the 90 day non-compete that main roster performers are given. Alongside his work in AEW, he has also made many appearances in Pro Wrestling Guerilla, becoming PWG World Tag Team Champions alongside Brody King. King and Buddy Matthews would later join Black in AEW as the House Of Black.