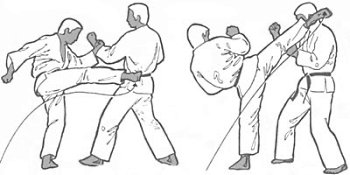 How to be awesome on multiple levels.
Chuck Norris once commented, "There are few problems in this world that cannot be solved by a swift roundhouse kick to the face. In fact, there are none."
— Chuck Norris Facts
Advertisement:

In fiction, the roundhouse kick is one of the most badass martial arts moves one can make, spinning in a full circle, thus giving the kick the force of 360 degrees of awesomeness, though contrary to popular belief, only variations of the roundhouse kick feature the 360 degree spin while the standard variant does not.

In Real Life, such a move is Cool, but Inefficient. A proper roundhouse kick is spinning in just a partial circle, to give the kick some extra force, but without telegraphing the move too much. There is a risk of the opponent dodging the kick, countering with a foot-sweep, or even grabbing the leg if he is skillful enough, but a proper roundhouse kick is one of the faster kicks in martial arts and can be launched without a chambering motion without much loss of speed for force, which makes such a dodge or kick less likely.

Of course in fiction, Rule of Cool says that doesn't have to be a problem, although some fighting games give a nod to the slower speed by making the full circle kick the slowest, but most powerful, kick that several characters have.

In real life, the simple roundhouse was at one point considered to be the game-winning kick in many forms of competitive martial arts due to a combination of speed, power, ease of preparation, and speed of recovery (if the kick is blocked, the striker can use the force of recoil to power the next kick).

A Sub-Trope of Spin Attack.

A Super-Trope to Hurricane Kick (doing several spinning kicks in the same move).