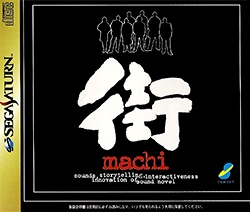 Even in this cold city, flowers bloom...
For you it was just another citizen passing by.
But that person had their own life and their own story.
Why were they at that place in that moment?
What were they doing?
— Description on the back of the case
Advertisement:

Machi (City, originally for the Sega Saturn, renamed in the PlayStation and Playstation Portable ports as Machi: Unmei no Kousaten lit. City: The Crossing Of Fate) was the third major visual novel by Chunsoft. After the success of Kamaitachi no Yoru and its multi-routes system, the company decided to make a far higher budget game with not just a hundred bad endings, but even multiple characters whose routes must all progress simultaneously.

In the city of Shibuya, countless people live their ordinary, strange, impossible lives. For five days, we are given a glimpse of eight of these lives. Amemiya Keima, a gamer junior detective, tries to solve a bombing case. Umabe Kintaro is a small time actor hoping for a lucky break, who instead gets into a bad situation with Ushio Masami, an ex-yakuza accidentally involved in a robbery. Ichikawa Fumiyasu is a successful writer who desperately wants to break free of the trite world of TV dramas. Hosoi Yoshiko is dared by her boyfriend to lose 17 kilos in five days, lest he dumps her. Takamine Ryuji returns to his hometown after running away three years earlier to join the Foreign Legion. Tobisawa Yohei discovers that two of his old flings have unfinished business with him. Shinoda Masashi is blackmailed by a mysterious beauty into entering a strange organization.

Throughout the course of five days, the player will need to guide these stories to their conclusion. To make things more difficult, choices made with one character will often influence other characters' stories, and rarely the effects will be immediately apparent. There's no central plot, and the different routes won't ever tangle outside of tangential moments, but the player has to complete each day with every character before they can move on to the next day, and sometimes a story will be interrupted with a "to be continued" screen that forces you to play as another character until you find a "zap point" back to where the interruption was.

The same template would be later used in its spiritual successor 428: Shibuya Scramble.