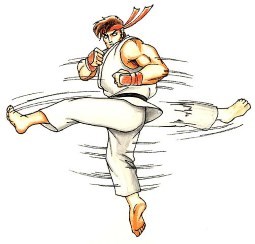 This is basically multiple consecutive roundhouse kicks, often done while jumping in the air.

Is a staple of the Shotoclone.

A Sub-Trope of Rule of Cool, Artistic License – Martial Arts, and Roundhouse Kick.