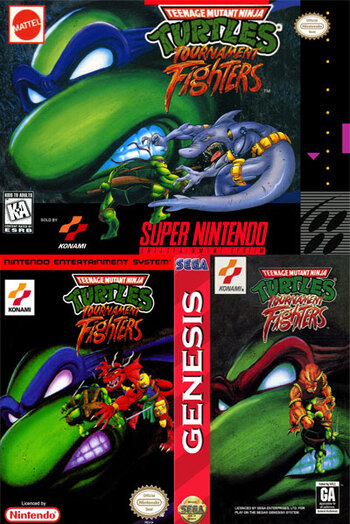 A fighting game series by Konami based on Teenage Mutant Ninja Turtles. It's a series, not a Multi-Platform release, because even though there are three games with the same name on the NES, Super NES, and Sega Genesis, each one is a Reformulated Game. All were released in 1993.

The SNES version would be most familiar with Street Fighter fans, as it has the most Follow the Leader elements. The other versions had different mechanics, due to fewer buttons.

Aside from the four Turtles themselves, who were in all three versions of the game, each game also had its own unique roster:

Tropes of the games in general:

Tropes of the Genesis Version:

Tropes of the SNES Version:

Tropes of the NES Version: