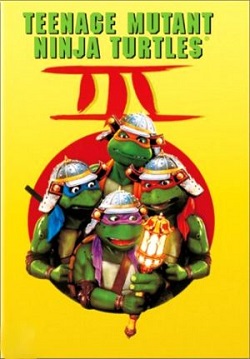 Jungle life, I'm far away from nowhere, on my own like Tarzan boy...
"Hey, you were expecting maybe, uhh, The Addams Family?"
— Donatello
Advertisement:

When an antique scepter sends April to 1603 Japan, it's up to the turtles to retrieve her and travel back to present day New York before the scepter's powers are gone for good. As they search for the scepter in that time period, they have to contend with an evil British weapons-trader named Walker, because everybody knows all the best villains are British.

Oh, and since both scepters exchange the people holding them between the two time periods, Hilarity Ensues as the misplaced individuals attempt to cope with their strange new surroundings.

The film was followed by TMNT.

Walker's plunge to his watery doom.

Walker's plunge to his watery doom.