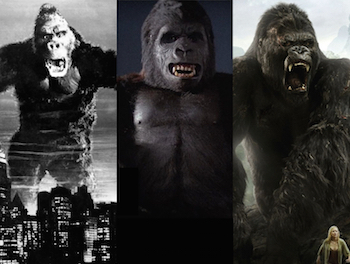 From Stop Motion, to Cosplay, to Zeroes and Ones, he's come a long way.note Left: King Kong (1933). Center: King Kong (1976). Right: King Kong (2005)
The inevitable fact that, as franchises go on, they will be given a special effects (very often, CGI) upgrade to compete with the times. Justified in the fact that many of today's sequels are of series from the 1980s or 1990s, where then-new CGI was often ditched in favor of actual explosions and stunts, and CGI is much safer (and cheaper) than, say, blowing up an entire office building. Often results in They Changed It, Now It Sucks! if the CGI is poor or merely jarring.