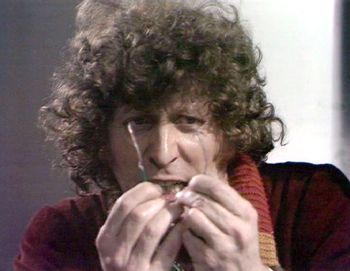 "Do I have the right?"
"I know that although the Daleks will create havoc and destruction for millions of years, I know also, that out of their evil, must come something good."
— The Doctor (pondering his navel)
Advertisement:

The one where Harry gets his leg stuck in a fibreglass clam, a Dalek leaves the fourth wall in tatters, and we're introduced to a certain chariot-riding megalomaniac.

Written by Terry Nation. This six-episode serial first aired from March 8 to April 12, 1975.

Having just finished saving future Earth from some Sontaran shenanigans, the Doctor and companions end up being hijacked on their way back to Nerva Beacon and are deposited instead on Skaro, home planet of the Daleks. The planet is at an early stage in its history, with a long war of attrition currently ongoing between its two human-like native races, the Kaleds and the Thals. The ultimate result of this war is that the Kaleds will inevitably mutate due to the high "chemical" levels. They've built themselves travel casings to remain mobile — and as we all know, these will enable them to become the Daleks. The High Council of the Time Lords instruct the Doctor to either prevent this entirely, or divert the Daleks' development into a more peaceful form, or — failing that — destroy them. They give him a "Time Ring" to allow him to return to the TARDIS once this is done.

The Doctor and companions make their way past horrific mutants, victims of the war's "chemical" exchanges, into the Kaled bunker, where truly frightening crippled mad scientist Davros and his henchman Nyder are conducting genetic experiments. They plan to discover the final form of mutation for the Kaled race and develop a new "Travel Casing" for the results, which Sarah and the Doctor instantly recognize as a Dalek. The Doctor and Harry escape from the bunker and persuade the Kaled leaders to put a stop to the experiments, but Davros colludes with the Thals to open the Kaled City's defences and allow it to be destroyed. He then activates his experimental Daleks and uses them to kill the Thals.

The Doctor makes his way back into the bunker and sets explosives on the Dalek breeding tanks, needing only to touch two wires together to prevent the Daleks from ever existing. However, he can't bring himself to commit genocide, and reasons that much good will eventually come out of the undoubted evil of the Daleks, and who is he to play god like this and so on. This fascinating debate is then interrupted by the arrival of a Dalek, forcing the Doctor to drop the wires and leg it. As the Dalek pursues it runs over the wires, blowing up the tank anyway.

Meanwhile, some of Davros's fellow scientists are uneasy about the experiments and demand they be stopped. Davros turns the Daleks on them, but his creations then turn on their creator and Davros himself is exterminated. Thals who survived the massacre destroy the entrance to the bunker, sealing the Daleks inside, while the Doctor and co make an escape thanks to the Time Ring. The Doctor estimates that his interference will have put the development of the Daleks back by a thousand years... but instead it's the catalyst for events that nearly destroy him and the whole of creation. Because after all, when it comes to war, someone has to fire the first shot...

One of very few serials not to involve the TARDIS even by implication: the Doctor and companions arrive by transmat beam, and leave by Time Ring. It also marks a significant turning point in the show's production in that it is the last six-part story to not be a season finale. Previous seasons, especially during the Second and Third Doctor's runs, were littered with serials that went well over the four-episode mark, with two particularly extreme cases in the '60s reaching ten and twelve. Thus, starting with the next season, the Doctor Who staff opted to limit stories to a maximum of four parts with the exception of season finales, which would be six parts until season 17 (which had to let go of the six-part "Shada" midway through production due to a worker's strike)note "The Two Doctors" clocks in at a runtime comparable to a typical six-part serial, but is divided into three 45-minute episodes; international airings would edit it into six 25-minute parts. The decision to mostly phase out serials above four parts also led to the two-episode structure of the previous story.

Finally, this would be one of only two serials to feature the Daleks during Tom Baker's seven-year tenure on Doctor Who alongside "Destiny of the Daleks" five seasons later, marking a considerable shift in how the series treated its recurring villains (following four Dalek stories and eight Master stories for the Third Doctor, one of which featured both villains simultaneously). The Daleks alone would only appear once for each succeeding Doctor for the remainder of the Classic Series' run, and other recurring villains would see similar reductions in how frequently they appeared, with the show instead shifting focus towards new foes who, more often than not, only showed up once.

Davros talks about his willingness to use a Virus to set himself above the gods and kill many people.

Davros talks about his willingness to use a Virus to set himself above the gods and kill many people.