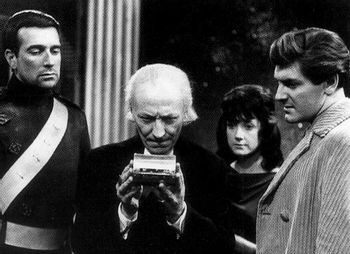 The Doctor receives some troubling news: most of this story got junked.
Your ideas are too narrow, too crippled. I am a citizen of the Universe, and a gentleman to boot.
—The Doctor, who, as we've already seen, is anything but gentlemanly
Advertisement:

The one where the Doctor completely demolishes the fourth wall.

Written by Terry Nation and Dennis Spooner. This twelve-episode serial first aired from November 13, 1965 to January 29, 1966.

A 12-episode monster (and the second longest story ever at five hours long), which begins with the TARDIS arriving on the planet Kembel and meeting Bret Vyon of the Space Security Service. Vyon is looking for Marc Cory, one of the men killed in the teaser "Mission to the Unknown". Together, they discover that the Daleks plan to use the "Time Destructor" to conquer the Solar System.

They report this to Mavic Chen, "Guardian of the Solar System" (i.e. Leader of the Second Great and Bountiful Human Empire) but it turns out he's in league with the Daleks and he sends SSS agent Sara Kingdom after Vyon and the travellers. The Doctor has meanwhile managed to steal the Taranium core of the Time Destructor, putting a spanner in the works.

Katarina is killed early in Episode 4, spacing herself along with her captor in order that the Doctor should not be forced to give in to his demands. Whether she knew what she was doing, or simply pulled the wrong lever, remains a Riddle for the Ages. Sara Kingdom shoots Bret Vyon (her brother) before making a Heel–Face Turn and joining the TARDIS crew as a companion.

Episode 7 interrupts the action for Christmas Day, in which the TARDIS materialises on a film set, the cue for much silent comedy with Chaplin and the Keystone Kops, before Steven points out that they missed Christmas. The Doctor produces a bottle of champagne and Steven wishes him a Merry Christmas— the Doctor then shatters the Fourth Wall by looking straight out of the camera and wishing "a Happy Christmas to all of you at home".

En route, we also revisit the Meddling Monk who managed to get his TARDIS's dimensional control back in working order since the last time we saw him, and the Doctor "borrows" another bit from his TARDIS to help his own function more predictably.

In the end, the Doctor turns the Time Destructor on the Daleks, and saves the day again, but at a terrible price: Sara Kingdom sacrifices her life, all the villains die, and even the planet Kembel itself is destroyed. The Doctor and Steven watch it all in horror...

Only Episodes 2, 5 and 10 remain (alongside a couple of short clips from Episodes 1, 3, and 4), and the Christmas episode in particular is almost certainly the one and only irretrievably lost episode, as no copy was ever made of it - the episode was designed to be an interlude that was incidental to the rest of the story, as it was felt nobody would be watching on Christmas Day, and the story was offered for sales overseas as an 11-parter.

It holds several records: longest Classic serial evernote Except for "The Trial of a Time Lord", though that's technically a season-long arc despite being labelled on-screen as one serial. Each individual story had a separate production code, internal title, and director. In terms of total running time, "Master Plan" was surpassed in 2021 by the 6-part epic "Flux", which clocks in at 5 hours and 24 minutes. And even then, some argue that "Master Plan" is really a seventeen-episode serial, starting with "Mission To The Unknown" and with "The Myth Makers" as a Breather Episode for the longer arc. In those days, serial titles were purely internal production affairs, and for viewers in the Sixties the show was just a single running serial called Doctor Who, so this is more true to how it would have been perceived at the time. Some even consider "The Massacre" as the final part or epilogue of a season-long Myth Arc about the Doctor and Steven being faced with constant loss and bittersweet victories., the first almost-companion with Bret Vyon, the first appearance of series regular Nicholas Courtney as part of the cast (long before his casting as the more iconic Brigadier Lethbridge-Stewart), the first, second and third (if you count Bret) TARDIS companion deaths, and others.

The Melodrama the Doctor, Steven, and Sara interrupted filming of in Episode 7 contains examples of:

"And incidentally, a very Happy Christmas to all of you at home!"