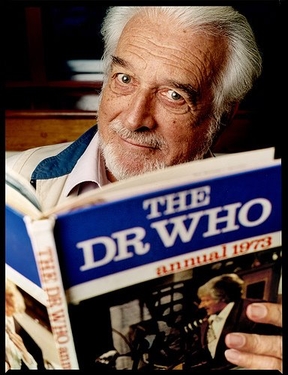 When I look back on my career, I think I might have done more classical work, but I jolly well don't mind. A friend who's done a lot of that said, "Yes, but look, you're rich." Which is kind of true.
Advertisement:

William Nicholas Stone Courtney (16 December 1929 – 22 February 2011) was an English actor widely known for his appearances in Doctor Who as the recurring character of Brigadier Sir Alistair Gordon Lethbridge-Stewart.

The son of a British diplomat, and educated in several places in Europe and Africa, he in fact performed national service in the British Army for 18 months before leaving to pursue a career in acting. Despite having guest appearances in well known shows and cult classics like All Creatures Great And Small, The Avengers, The Bill, Casualty, Doctors, Only Fools and Horses, The Saint, The Two Ronnies and Yes, Prime Minister, he became well known for his aforementioned recurring role in Doctor Who, where he made his debut as the Brigadier in "The Web of Fear". Despite this, he first appeared on the show alongside William Hartnell in "The Daleks' Master Plan" as a different character. He had been considered for the role of Richard the Lionheart in the episode "The Crusade" but impressed the director so much that he was kept in mind for future casting opportunities, leading to his casting as the Brigadier (then Colonel) soon after.

The majority of his appearances came alongside Jon Pertwee, during the Doctor's exile to Earth and subsequent working alongside UNIT between Seasons 7-11. It was here the catchphrase "Five rounds rapid" was first heard. (Amusingly enough, he would later use that for the title of his autobiography.) Even if his status as a companion is debated, his significance as a character is never in question. Despite limited appearances after those seasons he reprised the role in several audio plays, and would ultimately gain the distinction of being the only actor to work with every Doctor up to Paul McGann. When the series was relaunched he sadly never made an appearance alongside UNIT, although he was referenced via his tendency to get stuck in Peru. However he finally returned to the Whoniverse via The Sarah Jane Adventures in a reunion with Sarah Jane herself. An appearance in the episode The Wedding of Sarah Jane Smith, which would have seen him meet the Tenth Doctor, had to be withdrawn due to him suffering a stroke.

It was a tragic day for the series and fans when it was announced he had passed away following a long battle with cancer on the 22nd of February, 2011. (As if that wasn't enough, his friend and co-star Elisabeth "Lis" Sladen would be claimed by the same disease barely two months later. Doctor Who lost two of its most beloved icons in a matter of weeks.) He is survived by his wife and two children. Most of the tributes remarked how he was an Officer and a Gentleman, with close friend Tom Baker saying, "We shall miss him terribly." Truer words were rarely spoken.