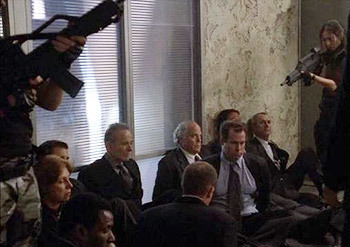 "Welcome to my retirement party. The rules are: No attacking the hosts. No leaving early. No calling the police. I see one cop, I kill three of you. I see two cops, six people die. You can do the math. Now, mess up my party by breaking one of my rules... you can expect me to overreact."
— Burn Notice, "Bad Breaks"
Advertisement:

The situation for the bad guys has gone so far sideways that the only way out is to trade hostages for transportation. This may be the true gauge of desperation, in that no degree of Genre Blindness can excuse the bad guys from knowing that their demands are never, ever met. Ever.

In spite of this, most municipal police forces on TV employ a negotiator specializing in these situations who has the job of convincing the bad guys that this time it could all turn out differently, if they are only judicious and fair in the way they release hostages. The negotiator's primary assistance in perpetrating this lie will be a wild-eyed SWAT team leader who is panting for a chance to nuke the building from orbit.

A few additional characters are required for this scenario. A hero-wannabe hostage, for instance, whose primary job is to try something stupid and get killed. This might be a case of death by Genre Blindness. A particularly noble hostage who tells the hero not to worry about them and kill the bad guy anyway. A hostage who decides to raise the stakes by calling the bad guy's bluff. There may also be a hostage who just completely panics and starts screaming and flailing about in a way that frightens a bad guy into shooting them.

In some instances, the crisis could be used as a smokescreen for other plans in mind. Or (one of) the hostage is secretly working with the bad guys.

Also see "Die Hard" on an X and Caught Up in a Robbery. Frequently involves Put Down Your Gun and Step Away. An ... unorthodox solution to this is to Shoot the Hostage, while only someone with Improbable Aiming Skills could try to Shoot the Hostage Taker. Contrast Baby as Payment, which is when a baby is taken permanently to pay for something else and Political Hostage which is the "polite" version of this used by polities throughout history as a form of alliance, subjugation and suzerainty.

Drug lord Poppy Adams holds the world hostage by revealing that nearly half the population has taken her drugs and will experience painful and lethal symptoms unless her demands are met.

Drug lord Poppy Adams holds the world hostage by revealing that nearly half the population has taken her drugs and will experience painful and lethal symptoms unless her demands are met.