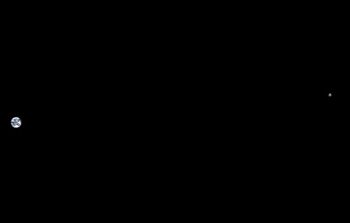 The Earth and the Moon to scale.note How far apart are they? You could put every other planet in the Solar System in the space between them. Yeah.
"Space is big. Really big. You just won't believe how vastly, hugely, mind-bogglingly big it is. I mean, you may think it's a long way down the road to the chemist, but that's just peanuts to space, listen..."
— Douglas Adams, The Hitchhiker's Guide to the Galaxy
Advertisement:

Space is huge, and the distances involved are far beyond normal human experience. On Earth, if your car breaks down on a country road, you can reasonably expect a rest stop or a gas station within 50 km (ca. 30 miles). Space, however, is not like that country road. If you set your space RV in a randomly-selected trajectory and continue going straight until you get within 50 million kilometers of a star, the chances are (quite literally) astronomically high that you will reach the edge of the galaxy, keep going, and never enter another galaxy... ever. For another example, every planet orbiting the Sun (including the likes of Jupiter and Saturn) could easily fit between the Earth and its own moon. That's how few planets there are in our big solar system.

This problem exists even for space travel restricted to within a solar system. Objects travel in orbits and don't occupy the same place all the time - planets orbit their sun, and other objects orbit something else that orbits that sun. A planet does not occupy its entire orbit at once, either. For example, the position of the Earth in its orbit during June and the position during December is a difference of 300 million kilometers. A space traveler who doesn't check his Earth calendar might be in for an unpleasant surprise. Add to this the fact that the sun itself is in orbit around the center of the galaxy, and the galaxy is also in motion, and things become rather complicated very quickly.

The solar system and the universe are far bigger than anyone expected them to be. People who are interested in space are pretty much flabbergasted when they try to take it in. The Moon is about 384,400 km (238,900 mi) away from the Earth. Ignoring the air/gravity/etc issues, if there were a highway to get to the Moon, it would take you five straight months of non-stop driving in your space RV at normal lead-foot highway speeds to get there. And the Moon is ridiculously close by astronomical standards. At the same speed, it would take 150 years to get to the Sun (150 million km) and 4460 years to Neptune (4.3 billion km when it's closest to Earth). As for things outside the Solar System? Well, try Proxima Centauri, the closest star to the Sun. At 1.3 parsec (40.3 trillion km), it would take no less than 41.8 million years at the same speed to get there. Have fun figuring out how long it would take to go to things like the Andromeda Galaxy (770 kiloparsecs from Earth).note A rough estimate is 24.7 trillion years. That's 1795 times older than the age of the universe.

The above in a nutshell: In Real Life, nothing in space is ever close, convenient, or in the same place it was a minute ago.

This does not deter sci-fi writers, though! A chance to visit a Single-Biome Planet or a planet with a dark secret offers far more story options than a spacecraft silently cruising for eternity, running out of power and with a group of mummifying bodies on board.

A subtrope of Artistic License – Space. A common side effect of Sci-Fi Writers Have No Sense of Scale. A sort of Artistic License – Geography, though the term "Geography" isn't usually applied to space because it's so big and different. Generally a necessity for Casual Interplanetary Travel.

If characters not only find a planet but land next to what they're looking for see It's a Small World, After All. Keep in mind that having Faster-Than-Light Travel would make things conveniently closer, but carries a laundry list of issues of its own. When asteroids are frustratingly close to each other, it's an Asteroid Thicket. Compare Road Trip Across the Street. The Mundane Dogmatic movement in science fiction calls for telling stories that use plausible science, thus no FTL travel and mostly set in the Solar System.