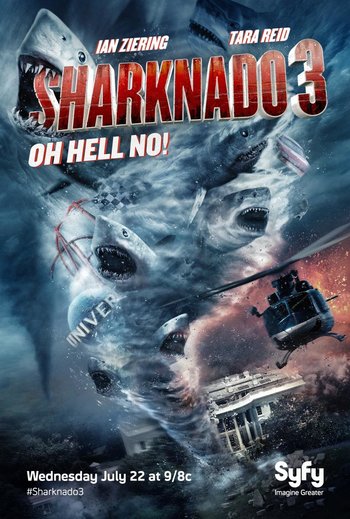 The third entry in the Sharknado franchise, following Sharknado 2: The Second One. It premiered on July 22, 2015.

A Sharknado strikes Washington D.C. and sharks start falling on the White House, so Fin must save the President. After this, he heads to Florida to join April and their daughter for summer vacation at Universal Studios Florida, meeting Nova and battling more sharks all along the East Coast. Yet another Sharknado hits Orlando when he arrives to find his family, with the threat of a shark hurricane on the horizon. It's up to Fin, April and Nova to stop the biggest shark-weather disaster yet.

Followed by Sharknado: The 4th Awakens.

fundraises for Democrats) and far-right conservative pundit Ann Coulter as the President and Vice President, respectively.