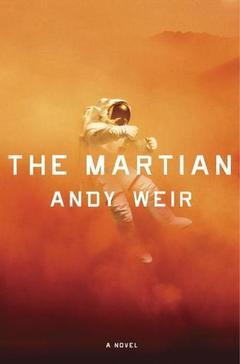 "I suppose I'll think of something. Or die."
Advertisement:

The Martian is a novel written by Andrew Weir, previously the author of the short story "The Egg", the completed webcomic Casey and Andy and the uncompleted webcomic Cheshire Crossing. The Martian was originally published on Weir's website in 2011, then as an eBook through Amazon Kindle, then finally printed by Crown Publishing.

20 Minutes into the Future, Mark Watney is an astronaut who is part of the third manned mission to Mars. Soon after they land, the Martian weather gets too rough and the mission has to be abandoned. In the escape, Watney is struck down by a piece of debris and presumed dead, and left on the planet. However, he survives. With no obvious way to communicate with mission control, he has to use the limited resources on hand to survive until the next mission — which is years away. In other words, a Robinsonade In SPAAAAACE.

It utilizes accurate science and is based on technologies which are being researched for Real Life manned Mars missions. No less an expert than Neil deGrasse Tyson, who is no stranger to calling out films which don't fit the bill, praised its "crucial science".

A film adaptation, directed by Ridley Scott and starring Matt Damon as Mark Watney, was released in October 2015 to much critical acclaim. The page for the film is here.

Weir would later write a series related short stories taking place before and after the novel, collected in audiobook editions as "From The Files of Mark Watney":

"From the Files of Mark Watney" contains examples of the following tropes: