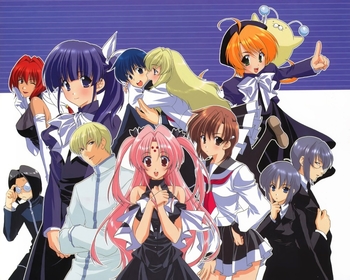 Girls Bravo is a Shonen Manga series written and illustrated by Mario Kaneda and serialized from 2000 to 2005 in Shōnen Ace by Kadokawa Shoten. The series was made into an anime by AIC in 2004, with a second season made in 2005. There are 24 episodes total. It also inspired a Visual Novel.

Yukinari Sasaki fears girls, having been teased and bullied by them to the point that he breaks out in hives upon mere contact with them. One day, having come home from school, his Tsundere neighbor Kirie Kojima kicks him into his bathtub, and he is transported to "Seiren," a mysterious world with a mostly female population. Much hilarity follows.