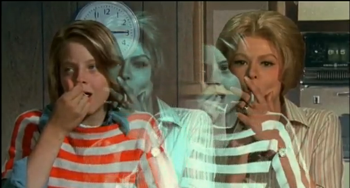 "I wish I could switch places with her, for just one day..."
Body Switch Movie:
The brain of one character somehow finds itself in the body of another. Requires actors to confront an actor's nightmare, i.e., acting as if they were another actor.
— Ebert's Glossary of Movie Terms
Advertisement:

The most benign subtrope of Body Snatcher: two or more characters swap bodies (or, equally, swap minds) by some form of magic or Applied Phlebotinum. Typically, a deeper appreciation of the other's life is attained. Named for a novel and movie about a body swap between a mother and her daughter.

To be really convincing, the actors may have to mimic the body language and speech patterns of the actor they are supposed to have switched with - e.g. an older person using very modern language and slouching. This is doubly complicated if they are trying to imperfectly pretend they are the other person.

When this plot is done in animation, usually the voices also switch as a narrative cheat to help younger viewers keep track of who's who. More subtly, it's just the eyes. More serious/action-oriented cartoons might not do this, however. The Flip often involves characters of different ages, gendersnote If the show is bawdy enough, there might be jokes about the characters getting used to their new anatomy, races, or social classes. Another variation is a protagonist and antagonist switching, which usually involves each trying to undermine the other's organization while simultaneously trying to switch back. Alternatively it may lead to a Heel–Face Turn. If one or both of the characters have superpowers or other special abilities, they'll have a lot of trouble figuring out their new powers.

A similar idea, with less learning and more evil, is Grand Theft Me. Compare Personality Swap, when the characters' personalities are swapped but their minds stay where they are meant to be, and Transferred Transformation. Contrast with Physical Attribute Swap, when two characters exchange specific physical traits like height, weight, or age without switching bodies entirely. Mental Time Travel might be a temporal variation of this. It will often involve similar tropes to transformation stories (such as Gender Bender) as this is essentially two of these in one, with the addition of confusion resulting from the transformations being into other known characters.note The Mirror Shows Your True Self is sometimes used to reveal the switch.

Nearly an Obligatory Joke in a Speculative Fiction series (as in, bound to happen sooner or later in the series, if it's popular enough).

In the original trope-naming film, the reason of the switch is never explained in-universe (in the book, the mother made it happen, although she refuses to explain how). However, the Doylist reason for any application is often to force the age-old moral: To better understand others, you must experience life in their shoes.

dedicated to covering all instances of body swapping in media.