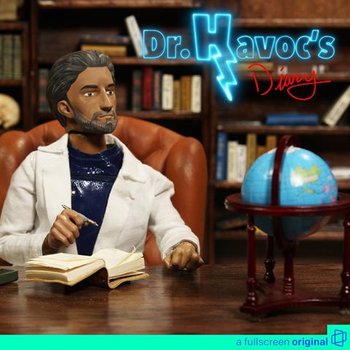 "Why does taking over the world have to be so f***ing hard?"
— Dr. Havoc (on the show's first teaser poster)
Advertisement:

From Mark Cope, Carlo Moss, and Mitchell Davis of New Form Digital. First pitched in 2013, this show follows the misadventures of Dr. Darren Havoc, the titular mid-level evil supervillain hellbent on taking over the world armed with his trusty photon laser and a healthy sense of cynicism.

in the form of the episode "Black Superhero".

The first six episodes of this show premiered on August 18th, 2016 on Fullscreen.note Before streaming services shut down on January 5th, 2018. Every other four new episodes premiered every Thursday, and the first season lasted for 30 episodes until September 29, 2016. More content

premiered to TruTV in Summer 2018 as a part of their Late Night Snack series. The first episode aired on June 1st, 2018.

On October 23rd, 2019, the series would find a new home on Amazon Prime

note (for viewers in America only).

Has a characters page, a Recap page, and a Best Episode Crowner

Imagine how YOU must feel when your unfaithful wife drops the possibility that your arch-nemesis may in fact be the biological father of your daughter!

Imagine how YOU must feel when your unfaithful wife drops the possibility that your arch-nemesis may in fact be the biological father of your daughter!