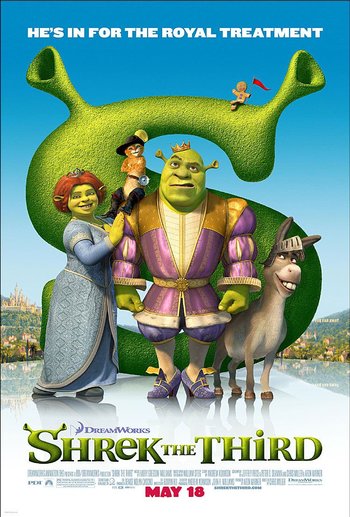 The wait is ogre.
"I can't let this happen. I can't! I am the rightful King of Far Far Away. And I promise you this, Mother... I will restore dignity to my throne. And this time, no one will stand in my way."
— Prince Charming
Advertisement:

The third installment in the Shrek tetralogy, Shrek the Third was released in 2007 by DreamWorks Animation, serving as a direct sequel to Shrek 2. This is also marking the first Shrek film distributed by Paramount Pictures after DWA's distribution agreements with Paramount. This would be followed by Shrek Forever After (2010).

At King Harold's deathbed, he leaves his throne to the ogre couple, Shrek and Fiona. However, Shrek does not want his father-in-law's crown; aside from not willing to give up his beloved swamp, he also doesn't think he's qualified enough to be a king. With his dying breath, Harold mentions the only other available heir to the kingdom of Far Far Away— Fiona's cousin, Arthur "Artie" Pendragon (Justin Timberlake). Meanwhile, Prince Charming gathers an elite fighting force of fairy tale villains in order to start a rebellion and take over the kingdom. Seeking revenge on the ogre who ruined his happily ever after, Charming gets his followers to track down Shrek while he imprisons his pregnant wife and her friends.

Shrek the Third contains examples of:

Shrek begins heckling Prince Charming's acting and play, which gets the audience laughing.

Example of:
The Heckler

Shrek begins heckling Prince Charming's acting and play, which gets the audience laughing.