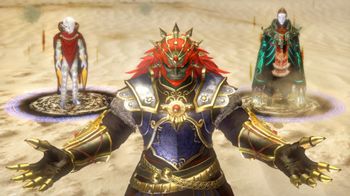 Who better to serve the Demon King than a Demon Lord and a Usurper King?
Starscream: As Megatron's first lieutenant, allow me to welcome you back to the winning team.
Megatron: And allow me to clarify the new chain of command. While Starscream will retain authority over military operations, Shockwave will be my first lieutenant in charge of all scientific endeavors.
Starscream: So, you are saying, we shall each report directly to you?
Advertisement:
Megatron: Affirmative.
—Transformers: Prime, "Scattered"

The Big Bad has two or more minions who report directly to them, and are regarded as equally dangerous among the other characters. They will usually have distinctive personalities, roles, or skill-sets, or may perform the same job but in different regions, but just like a single Dragon would be, they are answerable only to the Big Bad and are significant threats in their own right. Unlike the Quirky Miniboss Squad, they don't necessarily have a team dynamic—in fact, they may not interact directly at all. If they do, they'll likely be rivals.

Note — simply having multiple named Evil Minions does not qualify for this trope. This is a case of several characters being powerful, important, and/or feared enough to claim the role of second-in-command or primary executor of the Big Bad's will at one time. A character who does not serve in these capacities, or regularly takes orders from someone not the Big Bad, does not qualify as a Dragon, even if they're an important villain. Compare and contrast Big Bad Duumvirate, where two characters jointly hold the role of primary villain, rather than just primary minion. If there are enough Dragons, they might form the Standard Evil Empire Hierarchy. Also compare Bumbling Henchmen Duo (when the Big Bad's two main minions are comically incompetent) and Terrible Trio.

Lock, Shock and Barrel are a mischievous trio of trick-or-treaters from Halloween Town that served as Oogie Boogie's henchmen and were responsible for kidnapping Santa Claus.

Lock, Shock and Barrel are a mischievous trio of trick-or-treaters from Halloween Town that served as Oogie Boogie's henchmen and were responsible for kidnapping Santa Claus.