Anime / Doraemon: Nobita and the Haunts of Evil 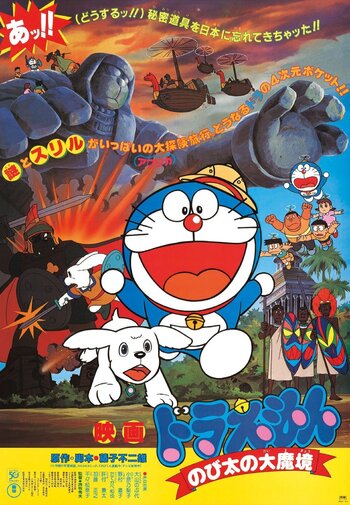 Poster for the 1982 adaptation
Advertisement:

The one with the hidden kingdom of talking dog-men. Also when Nobita finally gets a new pet.

Doraemon: Nobita and the Haunts of Evil is a 1982 animated film, based on the entry of Doraemon's Long Tales of the same name.

Nobita and friends are discussing the possibility of uncovering any unexplored new lands and hidden kingdoms, itching for another adventure and thinking the most likely being in Africa. Along the way, Nobita adopts a stray puppy which follows him home, which his mother Tamako actually allows him to keep after said puppy helps her find her missing handbag. His lifelong wish of having a dog granted, Nobita then names the puppy "Peko" and plays with it, but it turns out there's more to Peko than it seems.

Receives a remake in 2014, Doraemon: New Nobita's Great Demon—Peko and the Exploration Party of Five.

Doraemon: Nobita and the Haunts of Evil contain examples of: