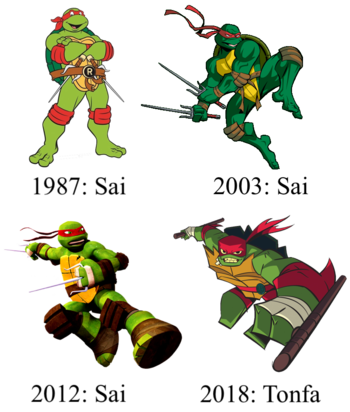 When a character's Weapon of Choice in one iteration of a story is noticeably different to another.

Since a character's weapon often indicates something about their personality or fighting style, this is usually a byproduct of an Adaptation Personality Change (or vice-versa). What was once a Boisterous Bruiser with an Awesome Ego showing off his moves with his kusari-gama is now a Fighting Clown cracking jokes as he subdues you with his Killer Yo-Yo. What was once a Sai Guy who wanted to end a fight quickly is now an Attention Whore out to dazzle you with their sick swordplay. What was once an honorable, katana-wielding Warrior Poet is now a total sicko, licking the blade of his butterfly knife before he shanks you with it.

Sometimes this is the result of a Genre Shift. Afterall, the gun-toting First-Person Shooter protagonist wouldn't last five minutes when thrown in a Stealth-Based Game, since all of the foes need to be taken out quietly lest they're overwhelmed and unceremoniously offed.

The odds of this change leaving the character better or worse off when asked to perform with these weapons is all rather subjective, since certain weapons and the kind of skills you can master with them tend to differ.

May be a form of Bowdlerization if their standard weapons were deemed too violent.