Never Smile at a Crocodile 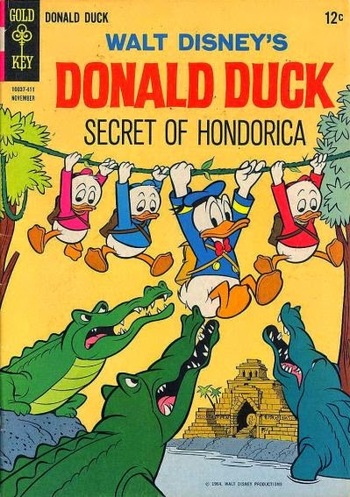 "Never smile at a crocodile
No, you can't get friendly with a crocodile
Don't be taken in by his welcome grin
He's imagining how well you'd fit within his skin"
— Peter Pan
Advertisement:

Everyone knows that sharks are bad news. They make the sea a scary, dangerous place. However, they live (mostly) in the sea, so that means rivers and lakes are safe, right? Wrong!

Crocodiles in fiction (as well as alligators, caimans, and gharials) tend to be huge, green monsters always looking for the next meal, lurking in rivers, swamps and sometimes in castles' moats or sewers. They have the most powerful bite force of any modern animal,note Extinct crocodilians such as Deinosuchus have the most powerful bite-forces of any animal ever. and armored scales which make them hard to hurt. They also appear to be perpetually grinning, so they evoke the Slasher Smile. Furthermore, they're reptiles, which tends to make them even more despicable if possible.

Worthy of note is the earlier comparison to the Threatening Shark. Whereas anyone knowledgeable about sharks can tell you how little Truth in Television there is in the way they're usually depicted in media, this trope is a bit more realistic. Unlike sharks, some species of large crocodilians will actively hunt people as a food source, and have no aversion to the taste of human flesh; in fact, crocodiles aren't picky at all, and will eat (and, with the most acidic stomachs of any animal, can digest) just about anything that moves. Works of fiction will still inevitably find ways of exaggerating these attributes, of course. In addition to their bite, their tails are strong enough to break bones when swung and they can use the rigid sides of their snouts as sledgehammers to deter aggressors and duel other crocodiles.

In reality, crocodiles aren't as voracious or one-note brutal as fiction portrays them to be; at the longest, they've been known to go up to a year without actually eating anything, and generally spend their time basking in the sun most of the year or burying themselves in dirt and mud during winter. And when they do eat, sometimes, they just eat fruit.

has its name for a reason.They have extremely acute senses, particularly their sense of touch which can detect the smallest ripples on the surface of water, as well as powerful eyesight that can see every color we can and see in the dark like a cat, and their sense of smell which can detect scents above water from beneath water. They're also known to be as intelligent as, if not more than, a domestic dog; some crocodiles have been observed using twigs and sticks as bait to lure nesting birds close to the water and hunt by memorizing where prey is at the water's edge before submerging to approach. In the water, of course, crocodiles are effortlessly graceful and fast swimmers, able to swim three times as fast as humans note Which isn't extremely fast, by aquatic animal standards, but crocs can maintain that fast speed for hours, much longer than other animals. and jump completely out of the water to catch prey flying above. Crocodiles cannot chew their food; this is the reason for the so-called "death roll", the practice of turning themselves along their longitudinal axis while clinching their prey in their jaws in order to rip out chunks of flesh they can swallow whole.

And for a last bit of Nightmare Fuel, some species of crocodile have been known to hunt in groups and work together to kill large prey. They also work together to eat, taking turns holding a carcass down while others rip off chunks.

Most surprisingly to most people, they're extremely protective parents. While both the mother and father crocodile protect the nest, which can house up to 60 eggs, the mother won't even allow the father to approach too close. When it's time to hatch, the parent lovingly ferries the hatchling crocodiles in her mouth to the water, and protects them from predators.note In the case of the Mugger Crocodile, it's the other way around, and the father ferries and protects the hatchlings.

And no, contrary to old expressions, they don't cry out of regret for eating their prey. They simply cry to lubricate their eyes.

The trope is sometimes subverted by making the croc a comedic glutton or a Cool Pet or even a Gentle Giant. Alligators are more likely to be portrayed in a positive light than crocodiles are, possibly due to the fact alligators are comparatively less aggressive towards humans and also slightly less threatening looking (gators are smaller and have more rounded features and overbites, while many crocs are very angular and all of them have toothier grinsnote which is ironic considering gators have more teeth than crocs), though they are still prone to this trope.

See also Threatening Shark, Shark Pool, and Reptiles Are Abhorrent. If you want their older cousins oft-compared to them, see Savage Spinosaurs. Sometimes dealt with via Palate Propping. Most instances of Sewer Gator fall under this trope as well.

Lady and the alligator

Tramp turns to an alligator to get Lady's muzzle off, but his giant jaws are far too much.

Lady and the alligator

Tramp turns to an alligator to get Lady's muzzle off, but his giant jaws are far too much.