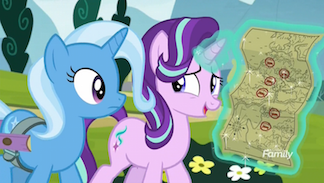 "This will be the best magical road trip ever!" Or not.
Written by Josh Haber

At the end of a magic show in Ponyville, Twilight Sparkle and Princess Cadance compliment Trixie and Starlight Glimmer on how well they work together. A Saddle Arabian unicorn named Hoo'Far has also seen the show, and he asks Trixie if she plans to do any performances in his homeland. She demurs at first, turning down his offer to trade her wagon for his larger, newer one, but eventually changes her mind and invites Starlight to go on the road with her.

Though living quarters inside Trixie's wagon are extremely cramped due to her props and Starlight's luggage, they decide to make the best of it. They get along well during the journey, but the experience begins to sour once they reach the desert village of Somnambula. Starlight's reckless spending leaves them short of funds for supplies, and they have to sleep in the wagon since every inn in town is packed to capacity. They drive each other crazy during the night and at breakfast the next morning, and their show (attended by Hoo'Far) degenerates into a barrage of sleep-deprived insults.

The next morning, Trixie is shocked to discover that Starlight has traded wagons with Hoo'Far so they can have more space. Furious, Trixie sends Starlight home with the new wagon and continues the tour alone, dragging her equipment across the desert. As Starlight struggles with the road hazards that had been so easy to conquer with Trixie's help, an encounter with a pair of traveling delivery mares — who have ended their own quarrel after seeing the two get along so well — inspires her to find Trixie again.

Meanwhile, Trixie intercepts Hoo'Far and demands to have her wagon back. Even after Starlight returns with his, he refuses to undo the trade unless they can prove their friendship. They clumsily improvise their version of the chant Twilight and Cadance did when they were younger, and Hoo'Far decides that only true friends would embarrass themselves so badly for each other's sake. With the trade reversed, Trixie and Starlight return to Ponyville, happy for having at least attempted the trip and for learning that they should never do it again.

Alternative Title(s): My Little Pony Friendship Is Magic S 8 E 19 On The Road To Friendship