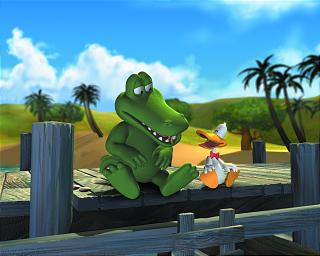 Sitting Ducks is an All-CGI Cartoon produced by Creative Capers Entertainment. It was spawned from iconic 1977 lithograph

and the 1998 children's book of the same name, both created by poster artist Michael Bedard (who also developed this show).

Sitting Ducks mainly centers around a good-natured duck named Bill, who establishes an unusual friendship with an alligator named Aldo. Said friendship is challenged by both the separate divisions between ducks and alligators (Ducktown and Swampwood, respectively) and the obvious idea of ducks and alligators being unable to establish any kind of friendship. The two of them end up in the usual Slice of Life affair, dealing with the three slackers next door to Bill, enduring complications that test their friendship, among other hijinks.

The series was originally shown in 2001 in Europe and was later brought to Cartoon Network in the United States and Japan, as well as YTV in Canada and ABC 3 in both Australia. It proved to be a surprisingly successful series in Europe, and was somewhat well-received in the US as well, running for 26 episodes over 2 seasons. Reruns have since popped up on Qubo and NBCUniversal's Peacock streaming service.